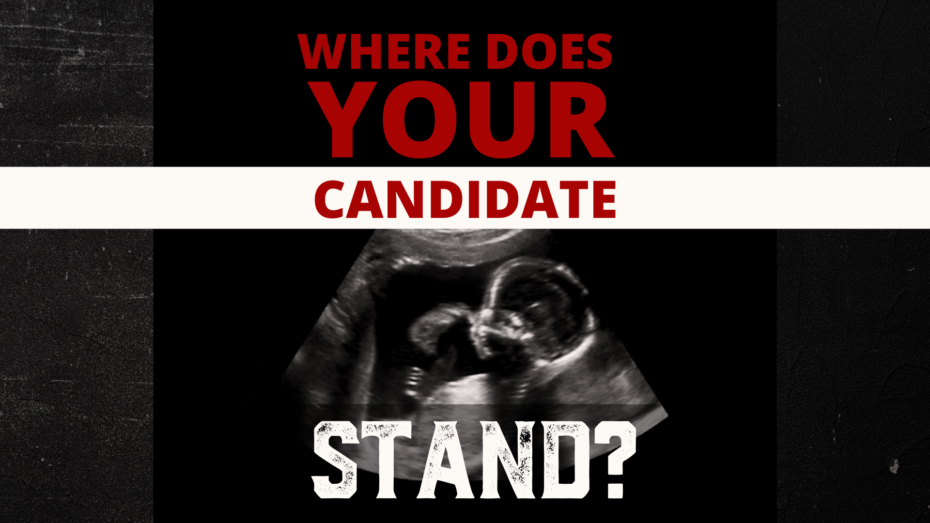 That is how long abortion has been “legal” in our country.

It was January 22, 1973, when the U.S. Supreme Court handed down their decision in Roe v. Wade, claiming to strike down the Texas law prohibiting the killing of an unborn child.

For far too long, candidates running for office will mouth generic Pro-Life talking points, but do next to nothing once they are in office to protect preborn babies.

Year after year, candidates promise to protect life, but when the time comes to actually uphold the Constitution and establish equal protection, which is an official Priority of the Republican Party of Texas, most don’t keep their promises.

That’s exactly why Abolish Abortion Texas sent a simple questionnaire to every candidate running for the legislature in the March 1st Republican Primary Election.

After all, the position taken on abolishing abortion by the person chosen to represent you in Texas House District 18 will affect the lives of over one hundred thousand preborn children just over the next two years.

And that’s why I am writing to you today.

Where Do Candidates Stand in HD 18?

In the Republican primary for House District 18, there are three candidates vying for the nomination: incumbent Ernest Bailes and candidates Janis Holt, Stephen Missick, and Ronnie “Bubba” Tullos.

With the deadline passing to return our candidate questionnaire on February 4, incumbent Ernest Bailes and Ronnie “Bubba” Tullos are the ONLY candidates for House District 18 who have REFUSED to return our survey!

By taking the AATX pledge, Holt and Missick are pledging to be fighters for the preborn in Austin.

It is alarming that any Republican candidate would refuse to answer a survey which should be easy to answer. We are only asking them if they agree with and intend to follow through on the Platform, Principles, and Priorities of the Republican Party of Texas when it comes to abolishing abortion.

But Bailes and Tullos are refusing to pledge to stand by the Republican Party of Texas Platform, Principles, and Legislative Priorities which call for the immediate abolition of abortion.

Publicly pledging to support the Republican Party platform, Principles, and Legislative Priority during the Republican Primary should be easy, yet Ernest Bailes, incumbent in House District 18, and Ronnie “Bubba” Tullos remain unwilling to pledge to do so.

Politicians who refuse to take any real position in defense of the preborn today are likely to be the first ones to cave once they are in office.

I’ve seen it too many times…

You can make a difference NOW

Right now in the days leading up to the Primary Election is the very best time to lobby candidates for office. It is when they are most sensitive to grassroots pressure.

That’s why it’s important to reach out to candidates Janis Holt and Stephen Missick to thank them for returning their AATX Candidate Surveys. Please urge them to stand strong in the fight to end abortion completely.

So before the March 1st Republican Primary, please contact Janis Holt and Stephen Missick to thank them for their unequivocal stance against abortion and encourage them to stand strong.

And also be sure to contact incumbent Ernest Bailes and Ronnie “Bubba” Tullos and urge them to pledge to follow the Priorities of Texas Republicans. Urge them to return their AATX survey pledging 100% support for abolishing abortion in Texas.

With the lives of preborn children at stake, your activism is important in this crucial time.

Thank you and God bless.

For Life, for Justice, and for the Glory of God,

—
ABOLISH ABORTION TEXAS IS A NONPROFIT ORGANIZATION REGISTERED WITH THE IRS UNDER SECTION 501(C)(4) OF THE IRC, AND DOES NOT SUPPORT OR OPPOSE CANDIDATES FOR OFFICE.