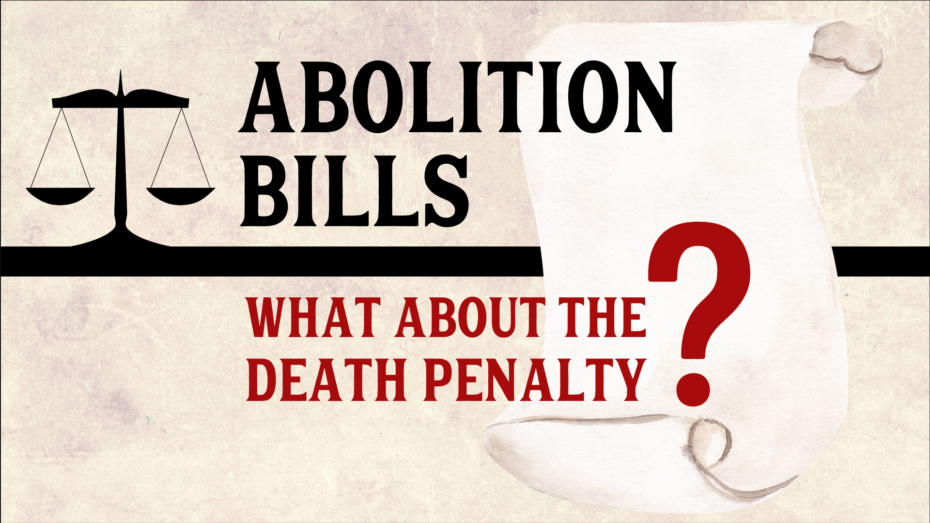 Abolition Bills and the Death Penalty: Clearing up the confusion

When we talk about bills to abolish abortion, we aren’t really talking about creating new laws at all.
Often, like in Texas, state law already defines abortion as homicide but then has an exception that allows for abortion. An abolition bill just removes or overrides that exception.
It’s really pretty simple.
Yet one of the biggest objections you may hear against abolition bills is that they supposedly give women the death penalty.
But is that really the case?
Let’s look at the common objections.

Myth #1: Abolition bills require the death penalty for women who get abortions.

Abolition bills do not require the death penalty. In fact, abolition bills don’t establish penalties at all.
Of course, it’s true that current Texas law provides that a prosecutor MAY choose to prosecute murder-for-hire or murdering a child under ten years old as capital murder. And current Texas law also provides that the death penalty is the MAXIMUM penalty a prosecutor may seek or a jury may sentence a person to if convicted of capital murder.
But the homicide chapter of our penal code also includes many other categories besides capital murder. A homicide may be charged as murder, manslaughter, or criminally negligent homicide. It could even be charged as criminal conspiracy, assault, injury to a child, or even a Class A misdemeanor charge of deadly conduct, the penalty for which could be a fine of $4,000 or jail time of one year or even one day. A judge could even give a defendant deferred adjudication or probation and the defendant could just stay out of trouble for a period of time or do community service. A prosecutor could even choose to give a defendant immunity to testify against the abortion provider, or the prosecutor could choose not to pursue charges AT ALL.
Even if a prosecutor did pursue charges, and a grand jury did indict, and a judge didn’t give deferred adjudication, and a jury did convict and sentence, and an appellate court did uphold the conviction and sentence, then a governor could still pardon the person or commute their sentence.
Those are the laws that already protect my life and yours once we survived long enough to be born.
We’re not saying that any of these outcomes are the right outcomes. We can’t say that because each case has to be judged on its own merits. That’s why we have a justice system, so that every situation is considered on a case-by-case basis.
The point is that abolition bills do not control the investigation of a crime. Abolition bills do not control the decisions of law enforcement or district attorneys as they decide what (if any) charges to bring. Abolition bills do not control the verdicts of judges or juries as they consider the evidence and determine whether to give maximum or minimum penalties or no penalty at all. Abolition bills do not control how appellate courts examine the record of trials and sentences. Abolition bills do not control whether a governor chooses to shorten someone’s sentence or even pardon them altogether.
ABOLITION BILLS DO NOT DICTATE OR CONTROL THE OUTCOMES AT ALL.
Abolition bills simply change the law to repeal or override the abortion exception so that the same laws prohibiting the homicide of a born person also prohibit homicide of a preborn person, and everyone is equally prohibited from committing homicide. Abolition bills simply remove discrimination against preborn children from our laws against homicide.
That’s called equal protection. And if we truly believe that a fetus is a person, then we should stand for nothing less.

Myth #2: Abolition bills will prosecute women for past abortions.

This is absolutely false. This is not how any other Texas law works and abolition bills don’t operate this way either. It would be unjust for the same government that told someone abortion was legal to then turn around and prosecute them for it. Abolition bills are not retroactive and do not allow for prosecution of abortions committed prior to the effective date of the abolition bill.

Abolition bills do not single anyone out. They simply remove the discriminatory, unconstitutional exemptions that prevent anyone involved in the killing of a preborn child from being equally subject to the laws.

Most Pro-Life bills, on the other hand, do single women out. Most Pro-Life bills ensure that no matter how brazen or premeditated a woman may be in aborting her child, no matter how many times she chooses to abort, and even if she violates existing Texas laws prohibiting her abortions, she may never be prosecuted in any way for her involvement in the death of her child.

Myth #4: Women who miscarry would be wrongfully imprisoned.

For a woman to be imprisoned at all would take the virtually unanimous agreement of the law enforcement officers investigating the death, the district attorney prosecuting the charges, the grand jury issuing the indictment, the judge and jury hearing evidence and issuing the verdict, the appellate courts reviewing the trial, and the governor reviewing the whole case.

The myth that passing an abolition bill would mean women would be locked up for having miscarriages is preposterous. Our justice system, while not perfect, has MANY fail-safe measures to prevent this kind of thing from happening.

Abolition bills do not create a whole new way for the justice system to handle cases. Abolition bills simply put cases with preborn victims into the same system we already trust to deal with the homicide of born persons.

A woman who has a miscarriage would be in no more danger of prosecution than someone who has an elderly family member pass away at home—much less so, in fact. Our existing justice system does not treat every death like a murder and abolition bills won’t change that.

No one, woman or man, has a “right” to murder an innocent human being.

Why do opponents of abolishing abortion perpetuate these myths?

The bottom-line is that many people just do not want equal protection for preborn children.

You may be surprised to learn that even many organizations, politicians, and lobbyists who identify as Pro-Life do not want legislation passed that establishes equal protection for ALL children in the womb.

When people use “the death penalty 😱” as a scare tactic against abolition bills, it just means they want special protections for themselves that they DO NOT WANT extended to the weakest and most vulnerable Texans. Essentially they are saying there should be “laws to protect me but not thee.”

They want to use the specter of the maximum penalties allowed by law for a capital homicide charge to scare you away from equal protection. They want you to be horrified that anyone might face homicide charges for the premeditated killing of an innocent preborn child. Don’t be.

The Bible has a name for this kind of unequal lawmaking: partiality. And it says God hates it. Also, the U.S. Constitution prohibits it and says states may NOT deny persons the equal protection of the laws.

That means, if you agree that a fetus is a person, you have to support equal protection to be consistent.

So the first question to ask anyone using the death penalty as a smokescreen or scare tactic is: Do you believe that a fetus is a person?

How they answer will tell you a lot.