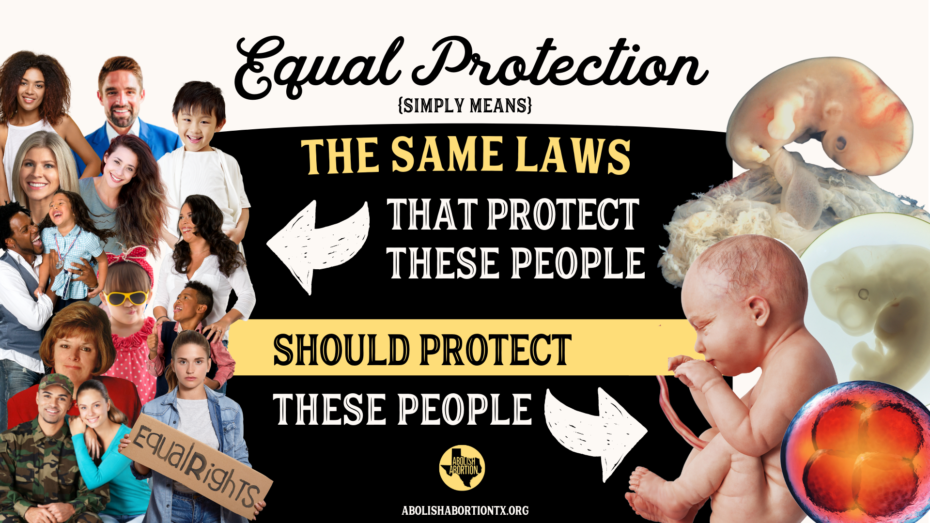 What Does Equal Protection Mean?

“No state shall deny to any person the equal protection of the laws.”1

Politicians who oppose equal protection for babies before birth either don’t really believe that a fetus is a person, made in the image of God, or they are okay with violating the Constitution.

Equal protection just means following the Golden Rule—do unto others as you would have others do unto you.2

Equal protection just means that the same laws protecting preschool children and any other born person from being murdered should also protect preborn children from the same thing.

Do you believe a fetus is a person?

The current Texas Penal Code defines “person” to include “individual” and defines “individual” to mean “a human being who is alive, including an unborn child at every stage of gestation from fertilization until birth.”[4]

HB 948 in 2017, HB 896 in 2019, and HB 3326 in 2021 would have simply gotten rid of the abortion exception for homicide. This would have made the same homicide laws protecting born people protect people before birth. No one who truly believes that a fetus is a person should have any problem with that.

Even the U.S. Supreme Court agrees. As it said in the majority opinion of Roe v. Wade,

Actions speak louder than words. We can claim to believe that preborn babies are persons, but until we’re willing to act like it, we’re going to continue losing.

Duty to do justice

Politicians who oppose equal protection want to discriminate against babies who are not yet born. Those politicians do not want the laws protecting their own lives to also protect the lives of babies before birth. “Laws to protect me, but not for thee.” We need to repent of this sin and demand that our elected officials do the same.

Download a printable version of this statement: Why Equal Protection? HERE.

Does an abolition bill require the death penalty?

No. Abolition bills do not require the death penalty or even establish penalties at all. They simply remove discriminatory provisions from the law that deny preborn babies the equal protection of the laws. This ensures the same homicide laws protecting persons after they are born would equally protect persons before birth.

Abolition bills do not control outcomes of investigations (if any), do not determine charges (if any), and do not decide guilt or innocence. Whether anyone involved with an abortion is investigated, prosecuted, convicted, or sentenced—and for what, if anything—would be up to the justice system that already exists to protect born persons: law enforcement, prosecutors, grand juries, trial juries, judges, and appellate courts; the governor also has the power to pardon or reduce sentences. Even if charged, a guilty party could be sentenced to as little as one day in jail, or get deferred adjudication, or do community service, or even be granted complete immunity for testifying against the abortionist.

Opponents of equal protection want to scare you into thinking that an abolition bill would automatically sentence every woman who gets an abortion to death, but that's just not true. Instead, equal protection would provide due process and require case-by-case examination by a justice system that demands near-unanimous agreement to punish anyone at all.

See more about abolition bills and the death penalty here.

Would an abolition bill support prosecution of a woman forced into an abortion?

No. Existing Texas law protects persons from criminal liability if their conduct was committed under duress. Abolition bills do not change that, but would provide for prosecution of the one who forced the mother into the abortion.

Would an abolition bill prohibit doctors from dealing with life-threatening medical emergencies?

No. An abolition bill would not change existing Texas law in this regard. Conditions like ectopic pregnancies are situations during which medical triage is necessary, with doctors never ceasing to treat both mother and baby as patients, and upholding the Hippocratic Oath by exhausting all reasonable means to save both. As affirmed by the Dublin Declaration, when such medical treatments are carried out to save the life of the mother, even if such treatment results in the loss of life of her unborn child, those involved are not subject to criminal liability.

Would an abolition bill allow women to be prosecuted for prior abortions they had before the law went into effect?

Would an abolition bill allow women to be prosecuted for miscarriages?

No. Abolition bills do not allow for prosecution of accidental or natural deaths.

Would an abolition bill ban IVF or contraception?

No. Abolition bills do not prohibit ethical IVF procedures or the use of true contraceptive measures. They do ban the use of abortifacients after conception if willfully used to cause the death of a child.

Pick up an Equal Value, Equal Protection t-shirt and advocate for your preborn neighbors wherever you go. T-shirts are available in our store in a variety of colors and youth and adult sizes. 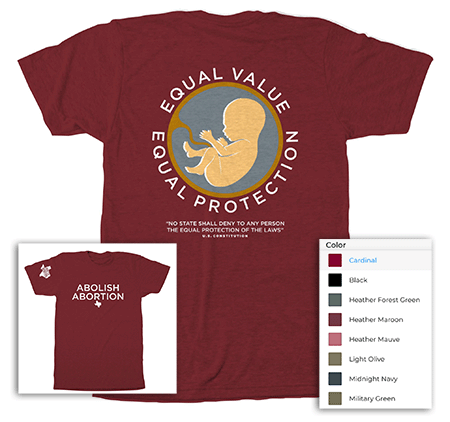 Use this postcard by Foundation to Abolish Abortion (FAA) to help educate people about Equal Protection for preborn human beings.

Download print-ready art to print and distribute postcards at your own event. 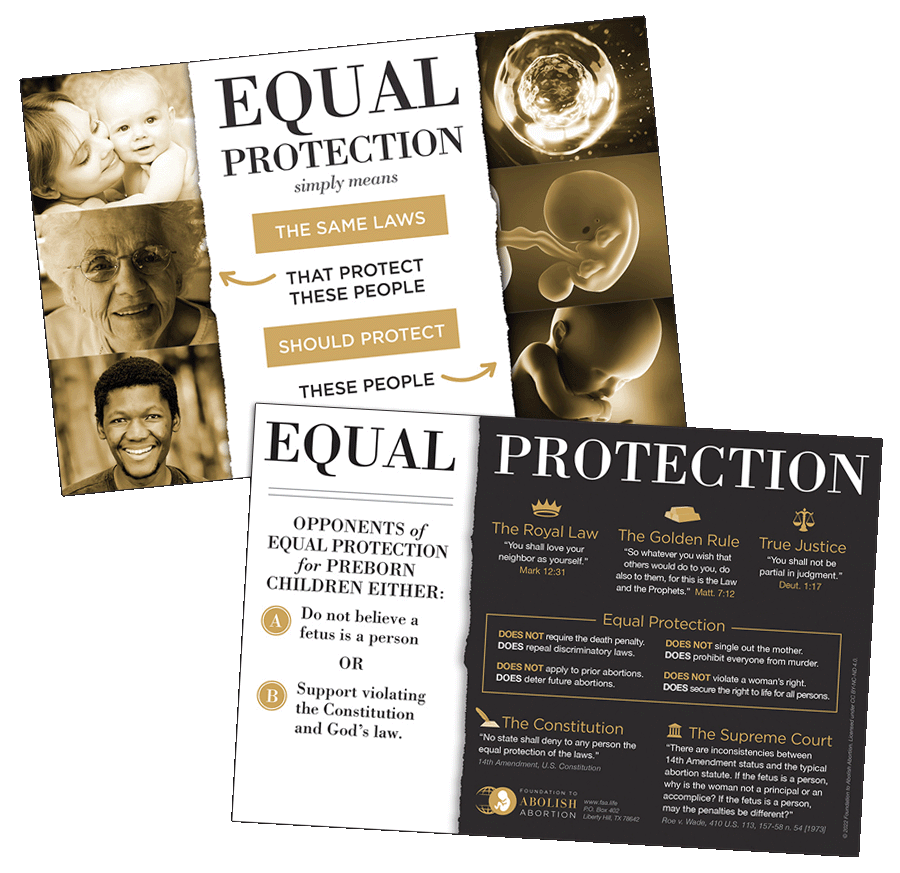