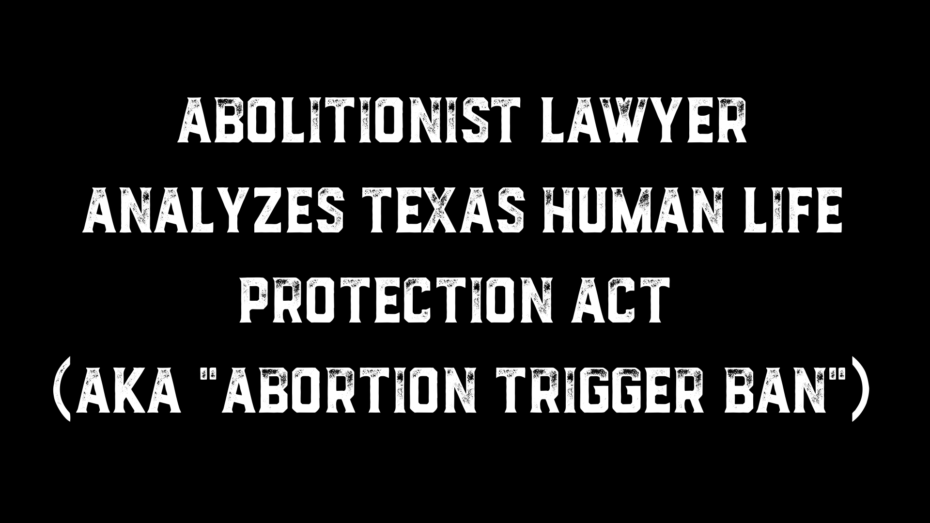 For decades, the pro-life lobby has relied on two primary methods of fighting abortion:

But nearly 50 years after the unconstitutional Supreme Court decision on Roe v. Wade, abortion is still legal in the United States, and the pro-life lobby is sticking to its guns with the same failed methods.

With a title like “Human Life Protection Act,” the hope and expectation would be that the bill would provide the same measure of protection to all lives, but this is simply not the case.

Right out of the gate, you can see that the bill does not provide equal protection to the pre-born, as the bill is modifying the Health and Safety Code. But abortion is the unjust taking of an innocent life, which is governed under the Homicide Code. If this bill were offering equal rights, it would have to modify Homicide Code, not Health and Safety Code. Abortion is murder, not “women’s healthcare.”

Getting into the meat of the bill, it seems to start off on the right foot when it says, “A person may not knowingly perform, induce, or attempt an abortion.” We can all get on board with that. But the very next line says, “The prohibition under [the above subsection] does not apply if...” Uh-oh. This is where we we start to see some major loopholes that would ensure abortion continues to take place in Texas.

It allows for an exception to the prohibition when the pregnancy “places the female at risk of death, or poses a serious risk of substantial impairment of a major bodily function.”

Another major exception: The bill also makes the mother immune to prosecution. Is the baby a real, live human being with any less value than a born person, say a toddler? If a mother murders her toddler, should she be immune to prosecution? Absolutely not. No one would say that “toddler murder” is just about criminilizing women because mothers might murder their children. Nor is charging anyone who murders a child in the womb about criminalizing women. It’s all about justice for the innocent.

Immunity for mothers is an especially important point to understand. Every year more and more women choose to administer abortifacients (pills or other agents that are used to cause an abortion) at home. Sometimes these abortifacients are prescribed by abortionists, but that is not always the case. You may be surprised to learn that there is now an international network of providers for abortifacients that will illegally mail them overseas to women who request them. No prescription needed.

That means you could make abortion completely illegal for the abortionist but keep immunity for the mothers, and there would still be tens or hundreds of thousands of abortions in the US per year for which no justice could be sought for the victims (preborn babies who bear the image of God).

It is not only a gross perversion of justice to allow an entire class of people to get away with murder (against another class of people in this case). It is also a completely ineffective way to try to stop abortion in the face of changing technology and methodology, because even if there are no more professional abortionists willing to carry out abortions in America, there will still be steady flow of pills being mailed right to women who are committed to killing their own children.

And as if this bill were not ineffective enough, “Section 2 of this Act takes effect, to the extent permitted, on the 30th day...”

To the extent committed?

Talk about ceding ground. The right to life is not only Constitutionally protected at the state and federal level - it is a mandate from God. The people of Texas do not need to be “permitted” to protect the lives of the innocent. We should absolutely be prepared to stand up and assert our determined resolve to protect the preborn, regardless of what the Supreme Court or anyone else says about it.

As I said at the beginning, the Human Life Protection Act does not live up to its name. In fact, it misses the mark by a wide margin. It’s not even modifying the right section of the law. It provides massive exceptions. It codifies the right of the woman to abort her child! It has no teeth.

It’s more of the same.

We need something different. We need to pass just laws that treat abortion just like murder. Roe v. Wade is not the law of the land. The Constitution is! And the Constitution protects the right to life!

There is no excuse for supporting “pro-life” legislation that does anything less than make abortion completely illegal. Instead, support bills that seek to abolish abortion like the Abolition of Abortion in Texas Act and the Enforce Texas Laws Act, both of which ultimately result in treating abortion for what it is: murder.

Right now dozens of Republicans elected to the Texas Legislature are looking for ways to prove their “pro-life” bonifides without actually abolishing abortion. Bills like SB 9 give them that opportunity.