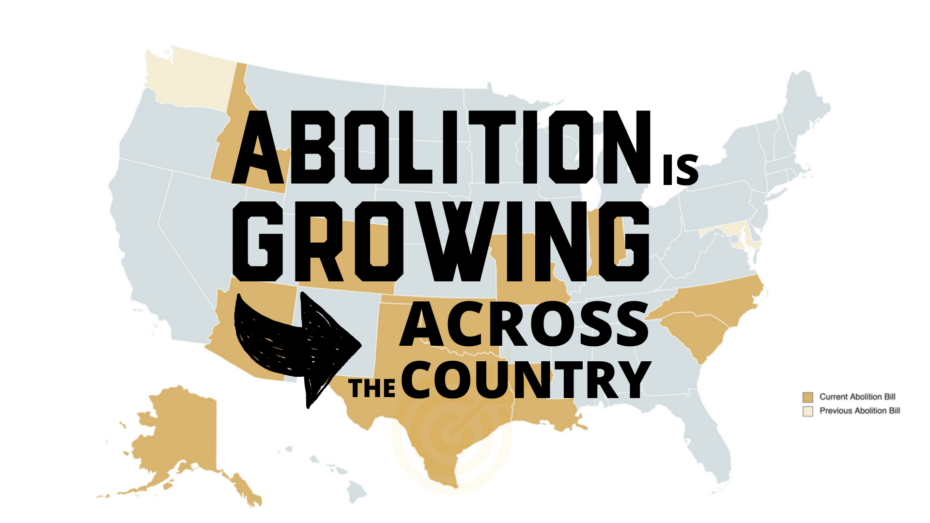 There are reasons for optimism in the fight to abolish abortion.

The biggest reason is the growing number of people who are joining us in repentance for previous compromise and growing the abolitionist movement to fight for the end of abortion without compromise.

More and more people are choosing to reject compromised strategies and are instead opening their Bibles and seeking to be obedient to God in this fight with simple faith.

We are grateful to see so many faithful people who want to do God’s will God’s ways as they fight alongside us to abolish abortion in Texas.

Almost nothing should boost our optimism more than this.

Because we can expect God’s blessing on our efforts when we are walking in faithfulness and obedience to Him. The Bible says that when God’s people, humble themselves, and pray and seek His face and turn from their wicked ways, then He will hear from heaven and will forgive their sin and heal their land.

That is what we want, right?

This is why using secular pragmatic strategies to rid our land of abortion will never really work. Even if they could manage to temporarily cleanse the outside of the cup, the inside would still be filled with death. Those strategies won’t be blessed by God. Humbling ourselves and turning from our wicked ways, THAT is what God will bless. He will bless us from the inside out!

So we go to Him to figure out how to fight the evil of abortion in the land.

That’s the best reason for optimism. But that’s not the only reason…

We are also encouraged by the real progress we are seeing in states across the nation. In just a few short years, there have been righteous, uncompromising bills to abolish abortion filed in 13 states!

Some states, like Oklahoma, have been working at it for a while now. Their first legislation was filed back in 2016, and they have had legislators file bills to abolish abortion every year since. And every year the support for those bills is STRONGER.

Other states like Colorado and Louisiana just filed their first abolition bills.

Though we haven’t seen an abolition bill pass in any state yet, every time one is filed more people hear about it, learn about the Constitutional, God-honoring strategy of abolition, and the movement grows. This is how change happens!

Every time a bill of abolition is filed in any state, there are opportunities to speak up on behalf of our preborn neighbors. And when we reject faithless arguments and simply bring truth, justice, and God’s Word to the legislators in our land, we get powerful moments like this one in Colorado. Watch and see Pastor Jeff Durbin give testimony to the committee considering the Colorado bill.

As you can see, Texas abolitionists don’t stand alone. The movement is rapidly expanding as more people hear about abolition. Often people just don’t know that abolishing abortion completely is an option, but once they do many of them are with us.

What is the Foundation to Abolish Abortion?

Our work here with AATX focuses on Texas.

But it has also been our privilege to be a part of legislative efforts across the country through the Foundation to Abolish Abortion (FAA).

We want to see abortion abolished across the nation, not just in Texas.

Besides drafting Texas legislation, we have supported abolition nationwide by drafting the Colorado bill, as well as bills for Arizona, Louisiana, Missouri, Oklahoma, and Washington state.

And the encouraging thing is that we have more states contacting us all the time as the movement grows and Christians want uncompromised, Constitutional bills of abolition to file in their states. We are able to draft legislation or advise those who are drafting it and working to get their legislation filed.

I cannot express how important the work we do through FAA is!

The more uncompromising bills to abolish abortion that are filed across the nation, the more momentum this movement builds.

We don’t know which state will be the first, but when one state demonstrates courage and establishes equal protection, it will only be a matter of time before other states will follow. That’s the thing about courage, it often only takes one to set the example and many others will follow.

How can you help?

If you would like to see more bills like this, you can support the work of the Foundation to Abolish Abortion TODAY. Your generous contribution to FAA makes it possible for us to help more states draft quality legislation that will abolish abortion immediately and without compromise.

Not only does the Foundation to Abolish Abortion draft bills, FAA also led the way in filing the first abolitionist brief to the U.S. Supreme Court, produces inspiring videos, and distributes powerful educational material.

If you are not in Texas, this is a great way for you to get involved in growing this movement, maybe to your state. We cannot do the CRITICAL work of laying the foundations for justice for babies across the nation without generous support from people like you.

And if you need your donation to be tax-deductible, the Foundation to Abolish Abortion is a 501(c)(3) nonprofit organization!

Fuel the work to abolish abortion across the nation!

We are grateful to every single one of you who continues to invest in this important work!