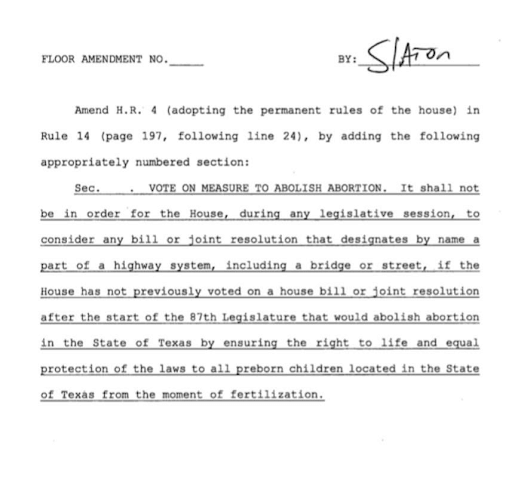 I am excited to announce that Representative Bryan Slaton (R-HD2) is introducing both the abolish abortion bill, and the bill declaring Roe v. Wade to be unconstitutional.

It’s time for Texas to lead the way.

Slaton moved to amend the Texas House rules to require that before naming another road or bridge the House must FIRST vote on legislation “that would abolish abortion in the State of Texas by ensuring the right to life and equal protection of the laws to all preborn children located in the State of Texas from the moment of fertilization.”

Here is the amendment to the rules:

In short, he called the bluff of every member who says that they are “pro-life.” To quote an article from Texas Scorecard:

“He made history becoming persona non grata with record-breaking speed, instantaneously raising the ire of the entire establishment class including the satraps, the prefects, and the regional governors. By the end of the day, they were ready to feed Bryan to the lions.”

We wholeheartedly agree that there is no more important business in the Texas Legislature than the protection of the preborn, so the submission of this amendment is good news all on its own…

…But it gets better!

You may remember in the last legislative session that only a small number of Republican legislators openly supported the Abolish Abortion in Texas Act. With House leadership staunchly and expressly opposed to it, our bill didn’t even get a vote in committee.

But God is at work. Always.

Friends, forty-one Republicans supported Rep. Slaton’s amendment. This is HUGE! In all frankness, the amendment did not pass, but this kind of support says something. It is a good sign, and a great start to the 87th Legislative Session.

While this change brings the list of members who supported the amendment to 47, there are still many more who opposed it. Hold them accountable! Contact them today, especially if your representative is on that list, and let them know how disappointed you are that they did not support abolition when given the opportunity.

While we have not seen the end of this fight, this kind of momentum makes me think of Psalm 9:1, which says:

“I will give thanks to the Lord with my whole heart;
I will recount all of your wonderful deeds.”

Yes, this is a great time to stop to thank and praise God, because, as we know, it is only He who can change hearts, and as Jesus tells us, apart from Him we can do nothing.

The abolish abortion bill this year is similar to HB 896 from the 2019 legislative session. This legislation fully recognizes that human life begins at the moment of fertilization, deserves equal protection, and that intentionally destroying that life is murder.

You may be asking, what is the difference between this kind of bill and other “pro-life” bills? After all, tons of pro-life bills are filed every year.

The difference is this bill does not compromise. It doesn’t allow abortion up to 12 weeks, or when a heartbeat isn’t detected, or when an abortionist claims the pregnancy is “adversely affecting” the mother.

It doesn’t create loopholes, and it protects ALL preborn children in the state. It is truly aimed at abolishing abortion in Texas!

Passage of this bill into law would be huge, and would eliminate “legal” abortion in Texas!

But we’re taking it step further. In previous sessions, we’ve only supported one bill at a time. This session we are supporting two.

The “Roe v. Wade Is Unconstitutional” bill will declare Roe void in Texas, which would remove barriers to the enforcement of existing state law. Under current Texas code, abortion is already a crime. It is already illegal in our state to kill children in the womb.

But due to an Attorney General’s opinion from the mid 1970s, these laws are not being enforced. This is wrong, and there is a new wave of understanding that it is past time to stand up to the Supreme Court. This new bill does just that!

Needless to say, we have our detractors. As in previous years, we expect a loud and fervent outcry from the left using arguments about “women’s rights,” and “judicial supremacy,” and any other number of baseless claims that are simply not rooted in the truth.

But there is more nuanced resistance, and you need to be on the lookout for it.

HB 896 was killed by Representative Jeff Leach, chairman of the House Judiciary and Civil Jurisprudence Committee despite over 400 individuals from across the state (and nation) showing up, waiting all day, and testifying into the wee hours of the morning in favor of the bill. And get this: Rep. Leach is a Republican.

There are many Republicans like Rep. Leach. They blithely declare that they are “pro-life,” and freely admit that life begins at fertilization, but when faced with the prospect of abolition they stand directly opposed.

We cannot accept this kind of two-faced hypocrisy.

Saying that you are pro-life is not enough.

Saying that you support the Republican party platform is not enough.

What matters here are actions, and it is up to us to keep our representatives accountable for the things they say they believe.

And the best way to start holding them accountable is by signing the petition today!

This petition will tell the governor and everyone else in Texas government that YOU support the right to life from the moment of fertilization, that murder in the womb is unacceptable, and that Abolishing Abortion in Texas is the ONLY way to move forward!

And once you’ve signed the petition, would you consider making a donation to help us move these vital bills forward?

Or, maybe a smaller monthly donation would fit better in your budget. Maybe just $15, $10 or $5? Know that by becoming a Sustaining Member with this kind of monthly contribution, you will be providing AATX with much-needed stable income to support ending abortion in Texas during this CRUCIAL legislative session!

So please, whatever you can do, sign this new petition right away! And make a generous contribution, if you can!

For Life and Liberty,

P.S. As we mark the heartbreaking 48th anniversary of Roe v. Wade, Rep. Bryan Slaton’s sponsorship of BOTH of our bills is exciting and encouraging.

On top of that, forty-seven Republicans have voted in favor of an amendment that would push abolition to the top of the agenda.

God is at work!

However, we cannot let up now. There is still staunch opposition both on the left and amongst those who say they are pro-life conservatives. It is up to us, up to YOU to hold your representatives accountable. If your Representative is a Republican and DID NOT support Rep. Slaton’s amendment, you need to confront them today! Ask them why, and tell them you expect them to support abolition in the future.

There will be more important ways that you can help in the near future over the course of the legislative session, so keep your eyes peeled. Your continued involvement in this fight is invaluable.

And the best way to start holding them accountable is by signing the petition today!

And once you’ve signed the petition, would you consider making a donation to help us move these vital bills forward?

Or, maybe a smaller monthly donation would fit better in your budget. Maybe just $15, $10 or $5? Know that by becoming a Sustaining Member with this kind of monthly contribution, you will be providing AATX with much-needed stable income to support ending abortion in Texas during this CRUCIAL legislative session!

So please, whatever you can do, sign this new petition right away! And make a generous contribution, if you can!