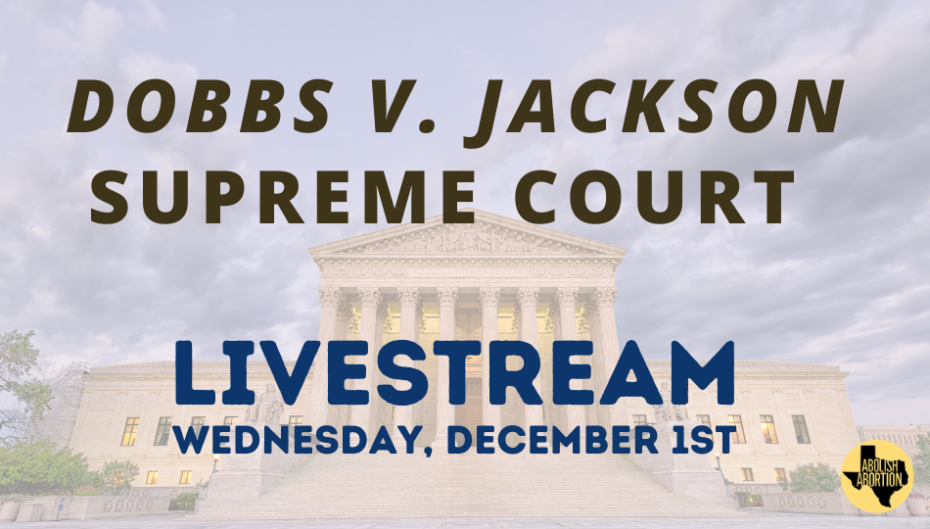 This is an interesting time in the fight for life.

I never thought I would be going to D.C. for a Supreme Court case, but I am planning to do just that.

The Dobbs v. Jackson case considering the Mississippi 15-week abortion ban, is scheduled for oral arguments on December 1, and God-willing, I am going to be there.

Tension has been building around this case and there is some good reason for the buzz. This is the first time in decades that our highest court will consider Roe head-on like this.

If you have been following AATX for very long you may be wondering why I care about a Supreme Court case at all. Don’t I just say we should Ignore Roe? Why does it matter what they decide?

Yes, I do say that. We should ignore Roe, which is an evil, unconstitutional opinion of the Court. States shouldn’t submit themselves to court opinions that defy the clear commands of God or the plain text of the Constitution they swore to uphold.

So, yes, we should Ignore Roe.

But that doesn’t change the duty of the Court to repent and do what’s right. We want a Supreme Court in this land that does what is just and honorable.

Even though we don’t have any righteous obligation to follow their evil ruling in Roe v. Wade, they still have the duty to overturn it. And they should overturn it.

We want the Supreme Court justices to do their Constitutional duty.

We want the Supreme Court to repent of their longstanding rebellion against God and the Constitution, and return to the idea that this is a land where there is liberty and justice for ALL because all human beings are made in God’s image and are equally valuable.

That is what our Friend of the Court brief in the Dobbs v. Jackson case is all about. It is a call to our country’s highest Court to remember their duty before God.

If you haven’t read my brief in this case yet I encourage you to do so. And, I’m going to tell you down below how to add your name to it.

To my knowledge, this is the first ever abolitionist brief submitted to the Supreme Court since the infamous Roe v. Wade decision was issued in 1973.

Now, I won’t be arguing in person before the Court—that will be for the parties actually involved in the case to do. But a Friend of the Court brief is a powerful way to reach the Court with the message of abolition.

Hundreds of pro-life briefs have been filed in the dozens of cases that have gone before the Court over the last five decades, but none of them have argued for the complete abolition of abortion with equal protection and without compromise.

Most pro-life briefs argue from within the confines of the Roe ruling and sadly give honor to a decision which is clearly ungodly and unconstitutional.

Friend, that only serves to give legitimacy to an opinion that has no legal or moral legitimacy. None.

No, we shouldn’t legitimize Roe in any way.

We want the Court to do their duty and abolish Roe.

And if they don’t, if they choose to continue in their rebellion to both God and the Constitution, we say the states should Ignore Roe.

That’s why I went through the process of being admitted to the bar of the Supreme Court and undertook the writing of this brief. The Supreme Court needs to hear these things and no one else is saying them.

You can bet the attorneys arguing FOR the Mississippi 15-week ban won’t be making these arguments.

Preborn babies certainly can’t go before the Court to testify for themselves. We have to do it for them! And it is an honor to do so.

I am grateful for God’s provision of the resources necessary to write, publish, and file this historic brief. And I am glad to say that I am not alone in support of it!

There are 21 total organizations who have signed on in support and are named in the brief. In addition to that, 20 state legislators from around the country have given their support.

You can also add your own name to the brief and join numerous other Americans putting their names down in support of abolishing abortion.

That is how it should be. Christians standing together to be a voice for ALL preborn babies no matter their age or whether they have heartbeats; regardless of whether they can feel pain or are able to survive outside the womb, ALL babies should be equally protected.

I am grateful to have this opportunity to be a voice for the voiceless in the highest Court in the land, and rejoice that there are many people like you standing with me. But the Supreme Court, and anyone else who reads this brief, should know that I don’t stand alone in my position.

If you agree with me that the Supreme Court should do their Constitutional duty and overturn Roe NOW please add your name to the brief.

If you agree that no matter how long an evil precedent has been in place, it is still the duty of the Court to repent of and overturn their previous evil rulings, sign the brief.

If you agree that we don’t need the Supreme Court’s approval to reject and ignore the unconstitutional Roe v. Wade decision, but we still desire that they do the right thing now and restore our trust in the Court by overturning their previous evil ruling, please sign the brief RIGHT NOW.

After signing your name in support of overturning Roe, remember to keep an eye out for the links we will send out for you to join us on the livestream of events on the Supreme Court steps!

P.S. We need the support of thousands of Americans like you who are tired of the hamster wheel of Pro-Life regulation and want to see baby murder ended NOW. Please take the time to read our historic brief and share it with your friends and family. And don’t forget to sign your name in support!