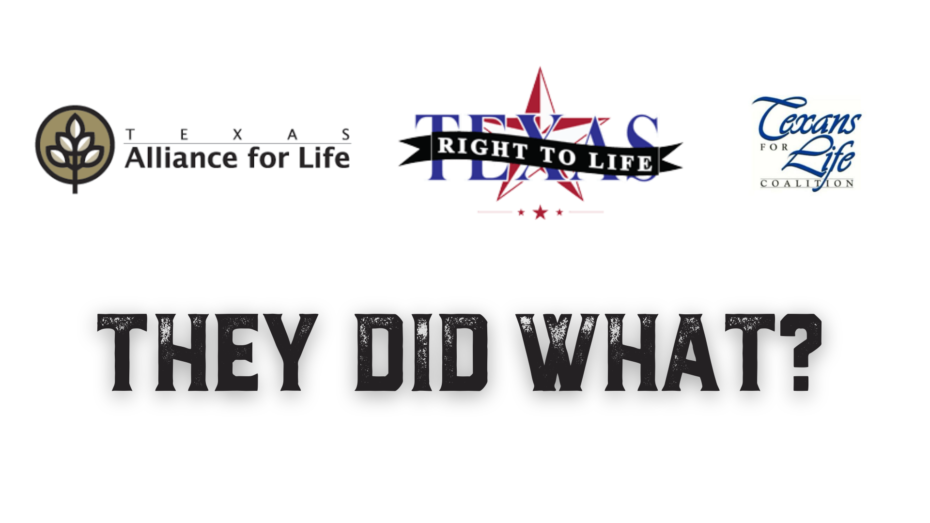 Something big happened in Texas this week that you may find hard to believe, so I need to explain it in detail.

To give you an idea, I’ll just say that most Republican politicians and pro-life organizations are NOT doing what you probably think they are doing.

As you already know, Republican State Representative Bryan Slaton has been leading the cause in the Texas legislature to abolish abortion in Texas–he has filed HB 3326, the Abolition of Abortion Through Equal Protection for All Unborn Children Act, and HB 3641, the Roe v. Wade Is Unconstitutional Act.

As you also know, both pieces of legislation have been denied committee hearings.

As the chairs of those committees have been blocking these Republican Party of Texas priority bills, Rep. Slaton has looked for additional opportunities to advance the cause to abolish abortion in Texas.

This week, an opportunity arose to do that when two major pro-life bills came up for debate on the floor of the Texas House of Representatives.

The first bill up was SB 8, known as the heartbeat bill, which its supporters claim would protect preborn children in Texas from the moment of a detectable heartbeat.

Unfortunately, SB 8 had a number of HUGE problems with it.

Among other issues with the heartbeat bill…

…it shirks the state’s duty to protect life by explicitly prohibiting the state from enforcing it (allowing only private parties to enforce it).

…it is practically unenforceable even for private parties because there would be virtually no evidence whether there was a heartbeat of an aborted baby or not other than the untrustworthy word of Planned Parenthood butchers and their ilk,…

…it denies equal protection and dehumanizes babies without a heartbeat,…

…and it essentially bows down to and legitimizes the unconstitutional Roe v. Wade decision, which further reinforces judicial tyranny and delays the ultimate abolition of abortion.

On top of that, federal courts have struck down heartbeat bills in EVERY state that has tried them, including in the Fifth Circuit (which includes Texas).

Because of the severe weaknesses of SB 8, Rep. Slaton had some amendments prepared to strengthen the bill both to protect life from conception and to oppose Roe v. Wade.

But as he was about to offer the strengthening amendments, Republicans and Democrats struck a deal to end the amendment period, thereby cutting off Rep. Slaton’s amendments.

While that was bad, I’m not even to the most shocking part of the day.

Thankfully, the fight wasn’t over, and Rep. Slaton wasn’t about to give up fighting for life.

This trigger bill says that abortion would be illegal in Texas if the Supreme Court eventually ever “allowed the states to prohibit abortion.”

By that phrase alone I’m sure you can already see problems with this bill.

Of course, the most glaring issue is that we don’t need the Supreme Court’s permission.

The Constitution and our duty before God are all the permission we need to provide equal justice under the law to those murdered in our state.

In reality, HB 1280 actually legitimizes Roe v. Wade and implicitly codifies it into Texas law (if you’re interested in a deep dive of the bill, I go over it in detail in this video legal analysis).

To put it plainly, the trigger bill does ABSOLUTELY NOTHING to abolish abortion now or even by a certain date.

It would only do anything about abortion AFTER the Supreme Court overturned Roe v. Wade, IF EVER.

So Rep. Slaton filed a bold but simple amendment to the bill, labeled Amendment 1.

Amendment 1 was short and sweet.

To get really specific, page 4, lines 6-18, of the bill are what described the bill’s enforcement being delayed until the Supreme Court ever “allowed” us to ban abortion.

So Amendment 1 simply struck those lines from the bill.

Striking those lines from the bill would mean that the abortion ban would go into effect THIS YEAR instead of waiting for permission from the Supreme Court.

Here is how one commentator described the amendment when Rep. Slaton filed it: 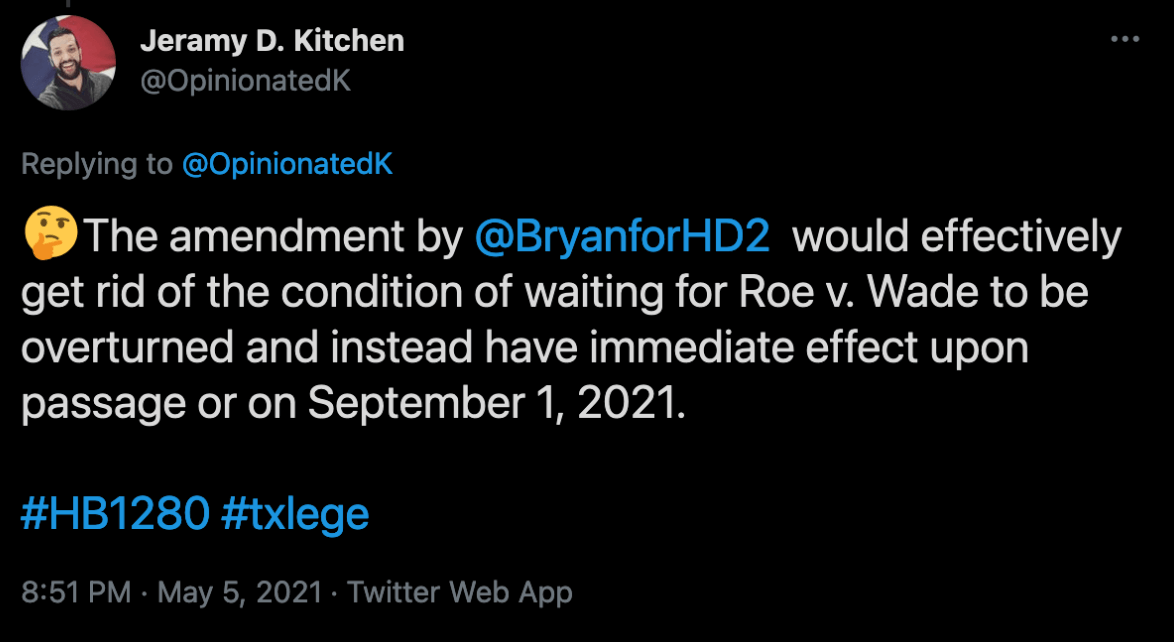 Jeramy D. Kitchen: “🤔 The amendment by [Rep. Bryan Slaton] would effectively get rid of the condition of waiting for Roe v. Wade to be overturned and instead have immediate effect upon passage or on September 1, 2021.”

Of course, you probably won’t be surprised when I tell you that the highest-ranking House Democrat immediately stood up to oppose Amendment 1.

But it’s what I’m about to tell you that will probably come as quite a surprise.

In fact, you may need to sit down for this one.

You see, at this point, you may be thinking, “This amendment is great! The Republican legislators should be totally in support of this.”

And it would make sense that you would think that.

I mean, our Texas Republican party principles, platform, and legislative priorities all support what Rep. Slaton was trying to do with Amendment 1.

It would also be understandable if you were assuming right now that pro-life groups who claim to support abolishing abortion would also be supportive of Amendment 1.

It’s only natural to assume that politicians who call themselves Republicans and groups who claim to be pro-life would support an amendment to abolish abortion.

But you would be wrong.

Because, instead of supporting Amendment 1, Republican leadership and pro-life organizations teamed up with the Democrats to ATTACK it and Rep. Slaton!

Several pro-life groups who have publicly claimed to support abolishing abortion instead came out and OPPOSED Amendment 1 and told legislators to vote AGAINST our chance to abolish abortion in Texas this year.

Texas Alliance for Life: “We oppose the Slaton amendment and encourage the members to vote no on it.”\

Now, if you’ve been watching Texas politics for long, these two groups opposing abolishing abortion may not surprise you much. For a long time, both have been vocal about their opposition to abolition.

But what may surprise you is that the relatively more conservative Texas Right to Life ALSO joined forces with Democrats and these others to publicly oppose Amendment 1.

Friends, this grieves me.

I hate having to tell you that these pro-life groups in Texas who claim to support abolishing abortion just came out and did the total opposite.

Although we’ve had disagreements about strategy for some time, I had been hoping that they would do the right thing this legislative session.

And I still hope and pray that they will come around someday.

But today, to defend Rep. Slaton and the cause of abolition, I felt the need to tell you about what happened.

To be candid, I’m still pretty stunned that Texas Right to Life went so far as to say they would “negatively score” Amendment 1.

Essentially, they were saying that Rep. Slaton’s amendment to abolish abortion was NOT pro-life.

Texas Right to Life was saying that Rep. Slaton gets a LOWER score on their pro-life rankings for offering an amendment to abolish abortion than those who opposed it.

They’re saying that the DEMOCRAT who was trying to KILL Rep. Slaton’s effort to abolish abortion was MORE pro-life!

That should tell us all something ominous about how these pro-life lobby groups are using the term “pro-life.”

They obviously mean something VERY different by “pro-life” than most grassroots pro-lifers who use that term.

Of course, Amendment 1 absolutely was “pro-life” like you and I have understood that term: for life.

That seems pretty “for life” to me.

But you need to know that the pro-life lobby doesn’t use the term that way.

That’s why, to avoid confusion with the lobby’s obviously twisted view of what it means to be “pro-life,” many Texans are now calling ourselves abolitioniststo better clarify our positions about truly ending abortion.

But I should finish the story…

In the end, after the highest-ranking House Democrat and the “pro-life” organizations teamed up to oppose Amendment 1, the Republican Speaker of the House killed Rep. Slaton’s amendment by ruling it out of order (even though there were plenty of ways the speaker could have ruled it in order if he had really wanted to).

While that was all quite disappointing, I cannot tell you how encouraged I was to witness Rep. Bryan Slaton’s continued faithfulness, boldness, and courage in the face of such challenging opposition.

He is truly answering God’s call to “rescue those who are being taken to death” and to “open your mouth for the speechless, in the cause of all who are appointed to die.”

We are so very grateful for his heroism, and I hope you will send Rep. Slaton your thanks.

Friends, can I conclude by telling you another quick story?

Around seven years ago, a friend of mine approached all these “pro-life” groups mentioned above and asked them the same question: if his boss, a legislator, were to introduce a bill to follow the Constitution by defying Roe v. Wade to outlaw abortion in Texas immediately, would they support it?

Amazingly, my friend told me that they all gave him the same basic answer, which was, “Not only would we not support that, we would oppose it.”

Friend, when I heard that, that’s when my part of a dream began to burn in my own heart, and that dream of mine and others is what has led us to create this organization, Abolish Abortion Texas.

Those meetings seven years ago took place behind closed doors, but this week the opposition of these “pro-life” lobby groups to abolishing abortion played out in the open for everyone to see.

I hope what happened this week is helping you to better understand the battle we’re all up against.

I hope you’re coming to understand how much we need your help.

Are you ready to abolish abortion?

Are you ready to follow God and the Constitution, instead of bowing to judicial tyranny?

Are you ready to treat your preborn neighbors how you want to be treated, instead of treating them as property or sub-human?

Are you ready to take action to love your preborn neighbor as yourself?

Then I ask you to become an abolitionist today.

And if you already are an abolitionist, please send this to your Texas pro-life friends, because we need a lot more Christians fighting without compromise for the true abolition of abortion in Texas.

For life, liberty, and the glory of God,