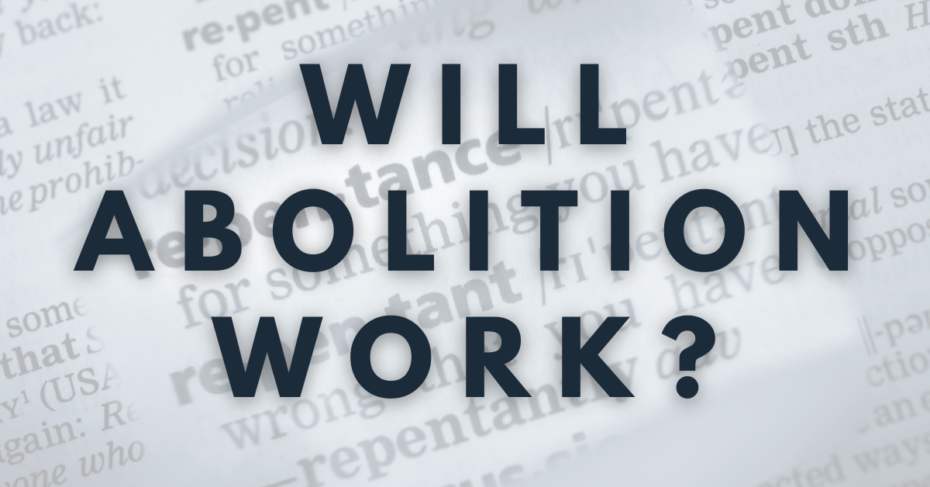 Can you imagine abortion being completely abolished?

That is what we are working for, but it’s hard to picture, isn’t it?

Abortion has been “legal” for almost 50 years. For many of us who are fighting abortion today, the Roe v. Wade opinion came down before we were even born. We don’t remember a world without it.

Abortion seems like it is woven into the fabric of the world we live in. We know that it is evil, but we have never lived in a world without it, so it’s pretty hard to imagine it actually being abolished.

When I talk about abolishing abortion I often get the question, “But, Bradley, will it actually work?”

People want to know if the things that I talk about—ignoring Roe, upholding the constitution, not compromising our principles—will actually end abortion. They want to know if I have an idealistic dream or if this is something we can actually do.

They want to see babies saved, not fight battles that can never be won.

Friend, I want to see babies saved too. Every single child is a gift from the Lord, and He tells us to rescue those who are being taken away to death. I wholeheartedly agree that we should do everything we can righteously do along the way to save babies who are being slated for death TODAY.

But, frankly, it seems like everyone fighting abortion has become so accustomed to begging the courts to allow us to chip away at the edges of legal abortion, that it doesn’t occur to anyone that taking a political sledgehammer to the whole barbaric practice is an option.

At AATX our stance is simple: abortion is an evil injustice against our preborn neighbors. Not only does God command us to love our neighbors as ourselves and to establish justice for the fatherless, which should be enough to show us our duty, but we also have peaceful constitutional means to abolish this murderous practice within our state.

Ignoring Roe and demanding complete abolition seems like an unbelievable longshot to most people.

And in some ways maybe it is…

Of course, waiting for Roe to be overturned has been a failed strategy, proven again and again over the last 48 years. The real mystery is why it still looks like a good strategy to anyone. But that is another story!

In our current cultural climate, and considering how entrenched this evil is in Texas and across the nation, we have a long way to go… a very long way to go.

I’ll be honest with you, even though this movement is growing, we are still small compared to the enormous evil we are fighting. There may be many more battles ahead of us that will be lost along the way to final victory.

We have seen losses already as bills that would have abolished abortion have been killed, almost always by those who should be on our side.

But don’t be discouraged; the Lord is on our side! Each battle, whether we win or lose, should spur us on in the fight. And it does!

Watch this video for more about how maintaining an uncompromising position and putting forward bills of abolition, even when they don’t pass, actually helps us grow the movement and win the ultimate fight for life.

We know that short-term defeat can set up long-term victory. And isn’t that what we want when it comes to abortion?

What I tell people when they ask me if calling only for complete abolition will work is that the duty is ours, the results belong to God.

What I mean by that is that God doesn’t call us to do His part of the job, He calls us to obedience and faithfulness. If we are going to fulfill our duty to love our preborn neighbors we must do it in God’s ways. That is what God will bless in the end.

The Bible tells us that the Lord says, “My thoughts are not your thoughts, Nor are your ways My ways.” Planning our attack based only on what seems most likely to us to “win,” is not actually a winning strategy—not when we take the Lord of the battle into account.

God’s strategies don’t always look smart to us initially. Marching around Jericho blowing trumpets did not look sensible. David, leaving behind military armor and bringing only his sling and stones to battle, did not look like a winner. Gideon whittled down his army to only 300 men before taking on the Midianites because he let God plan his strategy.

The common denominator, for people who love God, is faith that God’s ways actually are better than our ways, even when losing appears inevitable to our eyes.

The outcome of the war isn’t always told by the winning or losing of one battle … or even two, or three. Sometimes a loss becomes a rallying cry.

In Texas we say, “Remember the Alamo!” That loss could have been the end of the story, but it wasn’t. Texans kept on fighting.

Friend, when it comes to abolishing abortion, if we don’t call for what we want, we will never get it. It is really that simple.

We have found that fighting the battles and introducing bills of abolition, even when they lose, brings more faithful Christians into the fight. And when the next battle comes, we go in even stronger.

God is clear that we must not “pervert the justice due to the … fatherless.” If we try to fight the evil of abortion in a way that perverts justice for the preborn, we should expect to lose. We should not strategize to do evil that good might come.

Our call to abolish abortion completely and establish equal protection for preborn Texans is uncompromising because we believe that our goal, and the steps we take to get there, are righteous and pleasing to God.

But that’s not all…

Personally, I have another good reason to make an uncompromising stand.

I am a father, and I often think about what my actions teach my children. They notice absolutely everything I do, the good and the bad. I don’t know about you, but if I say one thing and do something else, my kids will call me out.

Friend, the next generation is watching how we engage in this battle right now. They see headlines and hear the talk. It is their peers, after all, who are being taken away to death right now. Think about that.

I want them to walk by faith, and not by sight.

Not to be overcome by evil, but to overcome it with good.

I want them to learn to trust God’s ways more than their own and to make sacrifices to follow Him.

I pray that the Lord will give me the grace to remain faithful to Him and His ways no matter the cost, and help me teach my children to do the same.

The fight that we are engaged in might be a very long one. It is good for us to count the cost, and remember that what we fight for is well worth the effort.

In His name, by His ways, and for His glory,

P.S. Do not be discouraged, the Lord is doing good work here in Texas! Take a few minutes to watch this video that will help you understand what maintaining an uncompromising call for complete abolition of abortion in Texas does to push forward the cause for life.