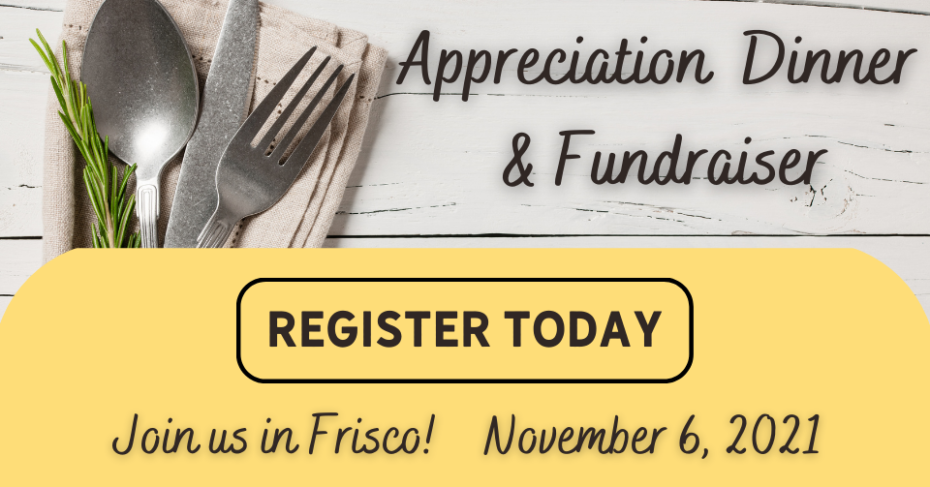 I know this fight to abolish abortion in Texas can sometimes get discouraging. The incredible evil of abortion looms large and the number of people who are fighting without compromise sometimes seems small.

Friend, I want to encourage you that in spite of what we are up against in this fight, there is much to be grateful for. We serve a great God and we have seen Him working over the past year!

We are blessed that He continues to give us strength, courage, and resources to carry on the work of abolishing abortion in Texas. Not only that, we rejoice that we are not working alone because so many people like you are laboring alongside us.

We have much to celebrate and a vision for the future that we want to share with you at our 2021 Appreciation Dinner and Fundraiser!

A lot has happened in the last year. The movement to abolish abortion in Texas is strong and growing stronger.

Many candidates supporting abolition won their races for election or reelection.

The fact that there are good candidates to support shows us that this movement is gaining momentum, and we expect that to increase even more.

The 2020-21 legislative session also provided many excellent opportunities for us to get involved.

One of the biggest things that AATX was able to accomplish this year was to help get Texas political candidates on record so that we know where they stand on abolishing abortion. Texans must know where their candidates stand on this crucial issue.

When politicians spend so much time pretending to do things to protect life instead of actually doing things that protect life, it is extremely important to get them on record so we know where they really stand. Actions speak louder than words.

We have been grateful for Rep. Bryan Slaton. During this legislative session he has worked tirelessly seeking equal protection for preborn Texans. At the beginning of the session he moved to amend the Texas House rules to require that before naming another road or bridge the House must FIRST vote on legislation “that would abolish abortion in the State of Texas by ensuring the right to life and equal protection of the laws to all preborn children located in the State of Texas from the moment of fertilization.”

Praise the Lord for his willingness to bring this motion to the floor! While it didn’t pass, it did get legislators officially on record voting for or against it. Like I said, friend, these record votes are critical to helping us understand who is going to actively work to abolish abortion and who is merely pretending to protect life.

Rep. Slaton didn’t stop there, he also introduced legislation to declare Roe unconstitutional which was then filed in the Senate by Sen. Bob Hall. And he proposed an amendment to the pro-life trigger bill HB 1280 which, if it had passed, would have turned that bill from a bill that does nothing while waiting on the Supreme Court to overturn Roe into a bill that would have abolished abortion in Texas this year!

We are immensely grateful for representatives like Bryan Slaton who are honoring God and standing strong for preborn Texans. And we are grateful for the many others who have been willing to sacrifice their time to come to the capitol to testify at critical times.

Scores of you joined us to testify when various pro-life bills were being discussed in Austin. Our legislators must hear the voices of countless Texans pleading with them to provide equal protection to the preborn instead of passing bill after bill that does little to nothing to protect babies in our state.

In addition to all the Lord has done in Texas this year, I was also able to file our landmark amicus brief to the United States Supreme Court in the Dobbs v. Jackson case which is scheduled to go before the Supreme Court later this year. We pray that brief is pivotal in persuading the hearts and minds of the Supreme Court and anyone else who reads it!

We are honored that the Lord has provided the resources for us to do so much, and we give thanks to God for the work He has done!

That is why we invite you to our appreciation dinner and fundraiser in Frisco, Texas on November 6. We anticipate an evening of fellowship that will encourage your heart as we give thanks for what the Lord has done.

We look forward to hearing from our keynote speaker, pastor Jeff Durbin, of Apologia Church. You will also hear from special guest, Rep. Bryan Slaton. I am also excited to share with you some of our vision for where we are headed in the future.

It is our hope that we all leave this event rejoicing in the work of the Lord and ready to continue the fight in 2022!

Registration for the Appreciation Dinner and Fundraiser on November 6 in Frisco, Texas is now open!

We encourage you to reserve your seat now and then share this event with friends who will be as excited about the work to abolish abortion as you and I are.

I look forward to seeing you there!

P.S. Don’t forget to register now to reserve your seat for November 6. We want to see you there!