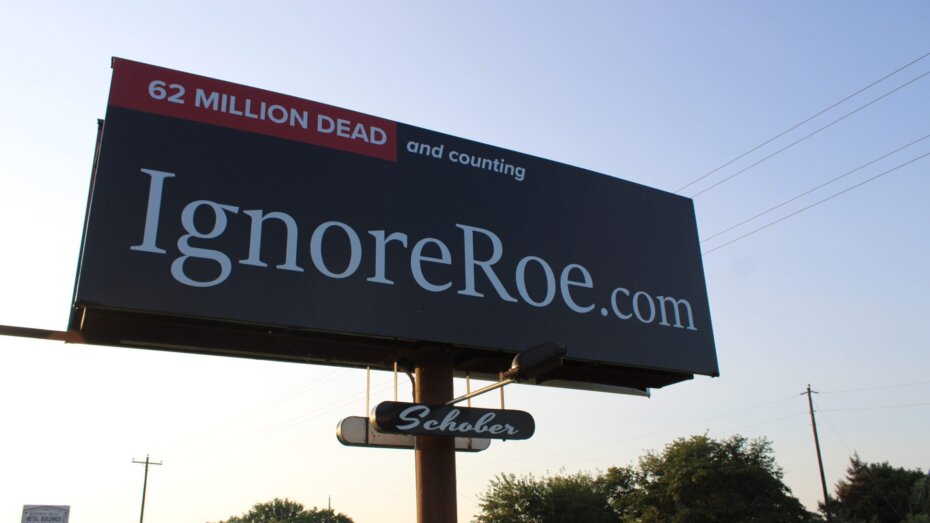 Most people think of Texas as being strong on family values. Texas—especially rural Texas—is pro-God and pro-life, right?

But is it really?

Let me share with you what happened in Boyd, Texas this week and you decide.

Recently, we leased a billboard on a rural highway outside the community of Boyd, Texas. On Sunday, the billboard company put up the billboard. By Tuesday morning, it was gone!

It only lasted one full day, less than 48 hours, before it was taken down! Our billboard was banned in rural Texas because of our message.

What was our message?

No pictures to make people upset, no comments about women’s choices. We didn’t even use the word murder. We simply said, “62 Million Dead and counting. IgnoreRoe.com.” That’s it.

Keep in mind that we didn’t put up our billboard in Austin or Houston. Friends, this was right in the middle of Republican dominated Trump country. You would think our message would be well-received by the overwhelmingly pro-life population in the area.

It wasn’t. Here’s what happened.

Shortly after our billboard went up a picture of it was posted in a Facebook group for local residents. It turns out some people didn’t like it.

It wasn’t pro-abortion activists from New York or California that wanted it taken down, it was the local residents of Boyd, Texas. Several of these concerned citizens decided to call the local business that is on the property where the billboard stands, and lodge their complaints.

When we first heard that our billboard was taken down, we called the billboard company to find out why. They told us that the landowner where the billboard stands was getting complaints and were concerned for their safety because of the message on the sign.

We knew some people would disagree with our message if they went to the website, but we didn’t expect such an immediate backlash.

Well, when the story first broke on what the billboard company told us, it didn’t go unnoticed. The Daily Wire published an article on this week’s surprising events.

When this story was first unfolding, my friend, pastor Jon Speed reported that our billboard was taken down.

He commented that, “This is rural Texas … This is honestly how weak the pro-life movement is in Texas that you can’t even put up an Ignore Roebillboard in “Make America Great Again” country without having people freak out and tear it down … In Texas, the so-called pro-life state, you can’t even keep an IgnoreRoe.com billboard up for more than a day because the place is so pro-life.”

If you are like me, it makes you wonder, “What does it mean to be pro-life?”

Does it mean anything at all?

Where is our courage and resolve, that all that it takes to cancel the message of abolishing abortion is to call in some complaints and make a few threats?

You will be glad to know that wasn’t the end of the story. We wanted to find out more about why our message was silenced so we contacted the business to which Boyd residents had made their complaints to ask what happened.

The secretary said that they had received several complaints, but no death threats. It seems the story we got from the billboard company was overblown. It seems that all it took to get rid of our billboard was a few disgruntled calls to a local business.

This is in Republican dominated, rural Texas.

We saw this week that even in staunchly pro-life Texas, a few angry complaints are seen as more compelling than the deaths of more than 55,000 preborn children each year. Within a matter of hours our message of abolishing abortion was allowed to be silenced. They didn’t even have to work very hard at it.

Friends, we can do better than this.

The call of the Bible is to, “be strong and courageous.” And that is what this fight requires. When we stand up to speak on behalf of those who don’t have a voice, we will face opposition. We should speak up anyway.

God has declared that He weaves us together in the womb, that human beings are created in His image, and we are fearfully and wonderfully made. Preborn babies are valued by God just like you and I are. And God calls those of us with a voice to be a voice for the voiceless.

With God’s help, that is what we intend to continue doing.

We are humbled by how God uses events that look bad to us to accomplish great things. Honestly, we were disappointed when we found out our billboard was cancelled, but the interesting thing is that publicity of this story has put the Ignore Roe message in front of far more people than it would have reached on a rural Texas highway.

The first billboard was taken down, but we believe there are courageous people in Texas who want to get the Ignore Roe message out there and places where it won’t be cancelled. We have plans to put up more billboards if we can fund them.

Friend, do you want to help us? Your donation of $15, $25, $35, or more, will help us reach more people with this message that is so offensive to the pro-abortion bullies.

More people than ever are learning what it means to Ignore Roe, and since we got a refund on our cancelled billboard, we can start looking for at least one new billboard location right away.

Since our message is getting run out of town, it may end up costing us more to secure more billboards. That’s why we need your help!

Though they tried, the pro-abortion crowd couldn’t keep the message supressed. The bullies didn’t win!

That might make the bullies mad, but it is a good thing for vulnerable preborn babies.

We are grateful for your support in the work to abolish abortion. It is voices like yours all across this state that are growing this movement into something that is pretty difficult to cancel or ignore!

For truth and for life,