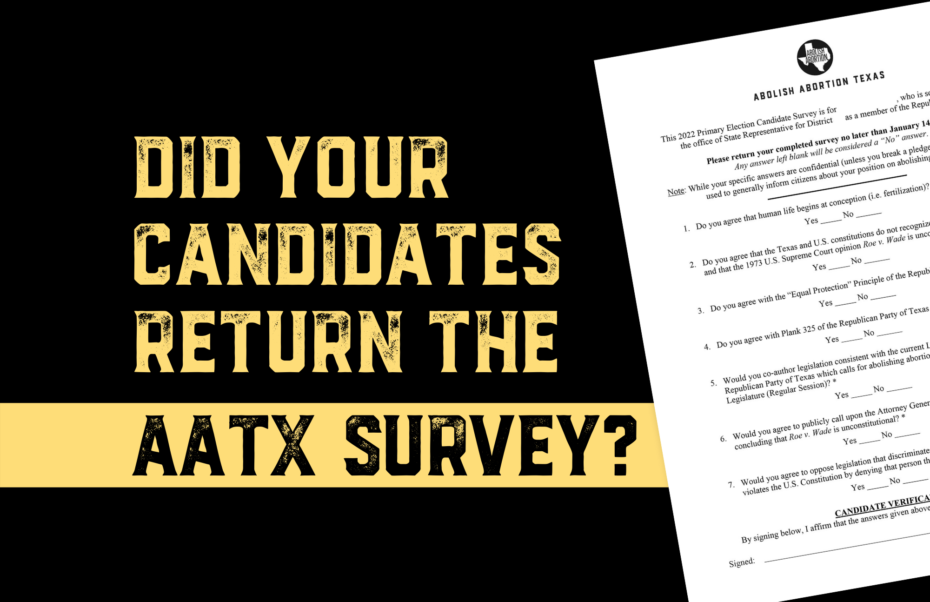 If you want to skip directly to the candidate list, just scroll to the bottom.

Right now is the best time to get political candidates on record with their views on abortion. Election season is when they have their ears open to what voters and constituents want.

That’s why we sent out the AATX Candidate Survey to Republican candidates in Texas for several statewide offices and those running for the state legislature.

We have talked a lot about how the words of many so-called Pro-Life politicians don’t match up with their actions. When they are campaigning they will say they recognize the “sanctity of human life” and that “life begins at conception,” but when they are in office they don’t follow through with consistent action based on what they claim to believe.

Instead, many of them choose to endorse and promote discriminatory and compromised legislation that throws the most vulnerable lives under the bus.

If we want equal protection established in Texas for ALL preborn babies so that they are ALL protected by the same laws which protect you and me, we have to fight for it.

That means we need to get candidates on record with where they stand on completely abolishing abortion in accordance with the higher laws of God and the Constitution.

The AATX Candidate Survey is the only survey in Texas asking candidates whether they support the principles, priorities, and platform of Texas Republicans. Grassroots Republicans in Texas are calling for IMMEDIATELY establishing equal protection for all preborn babies and ignoring all unconstitutional federal court rulings in order to do so.

We need to know if candidates intend to listen to the priorities of their own Party or not.

Right now is the time to get candidates on record so that we can let the people know where candidates stand on rejecting compromise and abolishing abortion immediately. Then we can hold public officials accountable if they break their promises.

The AATX Candidate Survey helps us understand which candidates are merely talking about abortion and which ones actually promise to DO SOMETHING about abortion–and not just something, but the right thing.

To get Texas candidates on record during this key time we need your help before February 4!

Though they haven’t all answered 100% positive (though most have), we are excited about how many candidates have already returned their surveys!

But there are some candidates who haven’t returned their surveys (see list below). These candidates need to hear from YOU. During election season, candidates are listening to voters more carefully, which means you need to speak up NOW.

Here’s what you can do to help.

We need you to:

The email addresses for almost all candidates are included in their information below.

Now is your chance to take action. If your candidate hasn’t responded, they need to know this is important to YOU.

So LOOK BELOW, take action TODAY, and contact your candidates before the February 4 deadline.