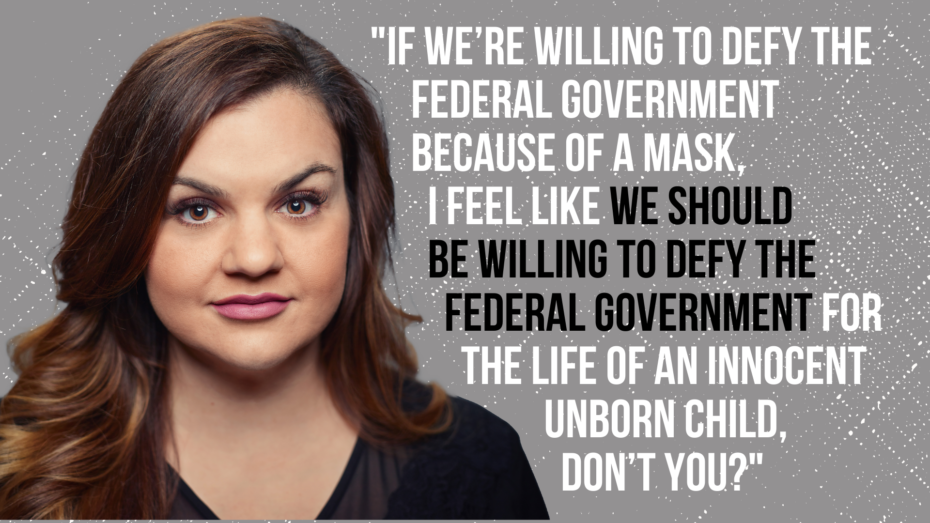 The Ignore Roe message is a big part of what AATX has been working so hard to get out there. And that statement has Ignore Roe written all over it.

But, this time it wasn’t us who said it. It was pro-life leader Abby Johnson.

She casually promoted the idea of defying Roe in a candid Facebook video she posted earlier this month.

Even though we’ve been working hard alongside people like you to get the message out, I was surprised to hear such a recognizable name in the pro-life movement talking about defying Roe. I mean, she just came right out and said it.

And she made some great points!

She said that if there ever was a time to defy Roe, now is the time. Big states like Texas and Florida have shown some willingness lately to push back on unconstitutional federal mandates. People are awakening to the fact that following the Constitution and protecting liberty sometimes means ignoring or defying federal mandates.

She said that there is no better reason to defy federal overreach than the lives of babies.

This is what abolitionists have been saying every time we bring a bill to abolish abortion to our Texas legislature. The good news is our message is being heard thanks to the willingness of people like you to be an uncompromising voice for the voiceless.

Though there are many other important liberty issues, it is true, we should be AT LEAST as passionate about providing equal protection for preborn babies as we are about resisting other mandates.

Obeying God’s command to establish justice for the fatherless, especially since we have Constitutional means to do so, is the right thing to do.

Doing the right thing sometimes provokes resistance. And Abby talked about that. What if a state did decide to defy Roe? Would the federal government decide to pull funding to that state for Medicaid or roads?

She suggested we should defy Roe “come what may” since children are being butchered and killed and torn apart in the womb.

I absolutely agree with that.

If we are more concerned about federal funding for our state than we are about the thousands of preborn children who are murdered on our watch, we have our priorities pretty messed up.

While we can’t deny that Abby Johnson has in the past spoken against bills that would have abolished abortion right here in Texas, I was still encouraged by her video. I hope and pray that her video represents a change in heart.

Regardless, it shows how much this grassroots movement to abolish abortion is changing the conversation!

In her brief video, she did not make it clear whether she would support bills of equal protection under the law for preborn babies.

She talked about “making abortion punishable in our state,” but would she support legislation that would protect people before birth with the same laws protecting born people?

It’s an important question we need to ask of anyone who starts talking about defying or ignoring Roe.

Equal protection is what we are fighting for after all. Not just the “right” to regulate the who, what, when, and where preborn murder is allowable.

Abby and many prominent Pro-Life lobbyists have so far not supported equal protection in Texas in the past when bills like HB 948, HB 896, and HB 3326 to abolish abortion were filed in 2017, 2019, and 2021. In fact, they often actively work against bills like these.

So, there is a lot more work to do. But with every passing day we are encouraged to see more people getting in this fight to ignore Roe and stand for equal protection for our preborn neighbors.

The conversation is shifting thanks to the many people like you who are using your voices to call for equal protection.

It used to be that everyone on both sides of the aisle agreed that, “Roe is the law of the land.”

It is a big step forward for this movement that now people are actually questioning that long-held “truth.”

The REAL truth is that Roe isn’t the law. It never was.

We should never have submitted to following that evil and unconstitutional court ruling. It does not lawfully bind the states to uphold it.

The actual law of our land, the Constitution, demands equal protection of the law for all people in the 14th amendment. And our God commands us to provide justice for the fatherless and condemns partiality in justice.

We need to obey God and the Constitution and Ignore Roe!

And we should do it come what may.

Abby’s video shows that the demand for equal protection is making a difference, it is shifting the conversation. But we also know there is a lot more work to do.

If you want to find out more about why ignoring Roe is THE Biblical and Constitutional way to abolish abortion, then you should join me at the Pro-Life is Not Enough conference in McKinney, Texas, on November 5-6.

The Bible is not silent on how to fight evil, love our neighbors, and establish justice. We should be eager to learn from God’s Word and put it into practice.

We look forward to an excellent time of fellowship and training that will help Christians become equipped to fight the evil of abortion in an uncompromising and God-honoring way.

Defy Roe isn’t just an idea to float in a casual Facebook video, it is something we can DO that will bring glory to God and demonstrate love toward our preborn neighbors.

If you want to learn more about what all of this means, come to the conference on November 5-6, and then join us for our AATX Appreciation Dinner and Fundraiser on the 6th.

I look forward to seeing many of you there!

P.S. The conversation is shifting toward ignoring Roe and obeying the Constitution, but there is a LOT more work to do. Don’t miss this chance to meet other Christians engaged in the fight for equal protection AND learn how to get involved yourself. Register for the Pro-Life is not Enough conference TODAY and join us on November 5-6.