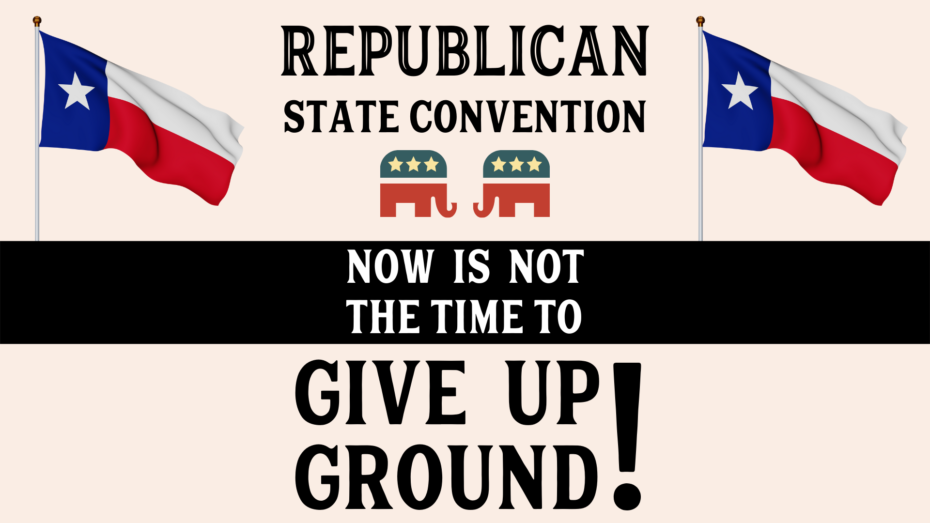 Will Roe v. Wade be overturned?

The whole world is waiting to find out.

For nearly 50 years, Texas and every other state have been submitting to the evil, unconstitutional opinion that we must allow the slaughter of preborn babies.

For 50 years, our courage has failed us. Instead of saying Ignore Roe and choosing to obey God and follow the Constitution, we have protected the “right” to kill babies with our laws. We have spent five decades regulating abortion like healthcare instead of abolishing it as murder.

More than 63 million babies have been murdered in this country under the protection of our laws, and those are just the ones reported.

But now it is possible that Roe v. Wade may soon be in the history books.

What will history say about us when that happens?

The eyes of the world are on the United States right now to see what we're going to do with abortion. And the eyes of the Republican states are on Texas.

That makes the statewide Republican convention in two weeks a DEFINING MOMENT.

Things are coming together to make this convention a critical one for our time.

It is exciting to see abolition making progress around the country.

In just the last few years, bills to abolish abortion have been filed in 13 states. These are righteous bills that would establish equal protection for preborn babies. And more states are calling on our team all the time to help draft righteous legislation to abolish abortion.

Just recently, we saw the state of Louisiana be the first state to ever pass an abolition bill through committee and to the House floor for a vote. The national media coverage the Louisiana abolition bill received exposed millions of people across the country and the world to the idea that preborn babies should have the equal protection of the laws just like born people.

The movement to abolish abortion is growing rapidly and this year’s Republican Party Convention in Houston June 16-18 could be a tipping point for the whole country on this critical issue.

With the possible overturn of Roe looming, the conversation about equal protection is heating up. If Roe is no longer in place, we will quickly learn who actually intends to abolish abortion and who merely wants to continue regulating it like healthcare even in a post-Roe world.

The major question for Texas Republicans right now is: Do we want to protect innocent preborn babies with the same laws that protect the rest of us … or not?

This is the question that AATX will be pressing at the state Republican convention in Houston in just a couple of weeks.

By God’s grace and help, we have made much progress in the last six years in our effort to strengthen the Principles, Platform, and Legislative Priorities of the RPT on abolishing abortion and providing equal protection for Texas babies.

This is very encouraging!

But we can’t sit back and rest now.

It may be hard to believe, but there will be people at the Republican convention working to walk back this progress. They want to continue regulating abortion like healthcare even after Roe is overturned.

Some people in the Republican party do not want babies to have the same protections of the law they enjoy themselves. I am not talking about pro-abortion Democrats here. At the convention in Houston the people working AGAINST equal protection for babies will be doing so from inside the Republican Party.

We are not going to give in to that without a fight. Now is certainly NOT the time to give up ground!

Now is the time to fight for the foundations of the Republican party to do what is RIGHT and follow God’s command to love our neighbors as ourselves.

Now is the time to make a STRONG stand while the world is watching.

We must not retreat! Courage is often contagious and if Texas Republicans take a fearless and principled stand NOW, many other states may follow.

It is interesting to notice that states across the country are mimicking the Texas Heartbeat Act, a bill that still denies equal protection to innocent babies. Imagine what might happen if we actually passed a bill to abolish abortion completely and immediately, treating preborn babies the way we want to be treated ourselves.

What if the Republican Party of Texas was unflinching on equal protection of the laws for preborn babies?

Help us make a difference in Houston.

We have many volunteers and delegates lined up to help us make the most of the golden opportunity this convention provides. We are planning to make a BIG impact on Texas Republicans that cannot be ignored.

We will be stirring up awareness of our Resolution to Abolish Abortion as well as educating delegates about abolition and equal protection.

We will be making contact with nearly ten thousand Texas Republican delegates who are EXACTLY the kind of grassroots leaders who need to hear our message.

With God’s help, we want to be a voice of COURAGE in this defining moment.

We need your help to make the biggest impact possible!

We already have many volunteers and delegates who will be standing with us in Houston but we need to provide them with the tools they need to make a difference.

Help equip us to seize this golden opportunity to not just defend the ground we have gained in Texas but to set a STRONG example for the country and the world that is watching.

We are more than half way to our funding goal right now. Your donation of $50, $100, $250, $500, or even more will make a HUGE impact on our ability to reach the thousands of Republican grassroots leaders who will be attending this convention.

We need YOU to stand with us and invest in this work now.

YES, I WANT TO HELP!

We are grateful for all those who are standing with us financially and in prayer as we prepare to make the most of this opportunity.

Whether you can give to this project or not, please pray for God to bless our efforts in Houston!