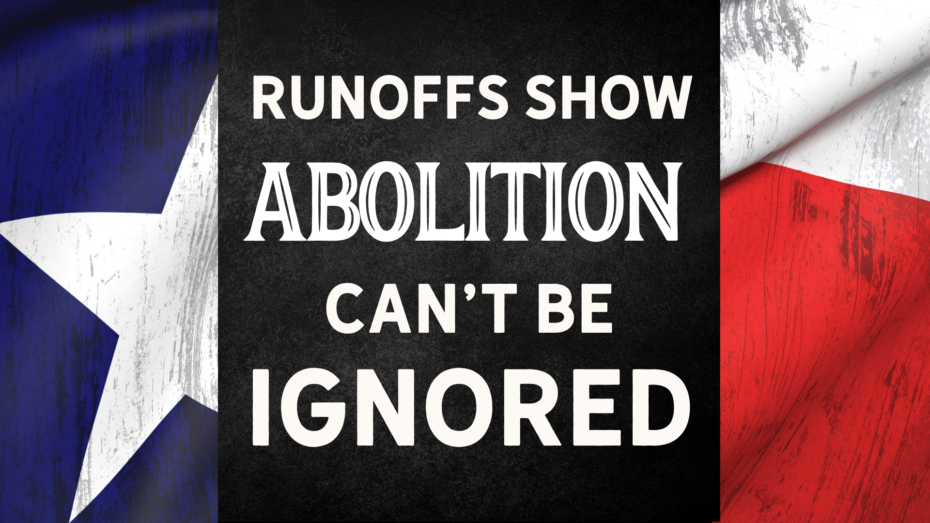 Sometimes you have to wait for the smoke to clear to know the final results of a struggle.

The battle was certainly heated in HD 91 as abolitionist candidate David Lowe gave incumbent Stephanie Klick a serious fight for the Republican nomination. So much so, that the initial Republican primary pushed to a runoff between Klick and Lowe.

When the votes in the runoff primary were counted this week, Klick won re-election and secured her house seat for another term.

While the fight in House District 91 was an electoral loss for the candidate supporting abolition this go-round, it still gives us MANY reasons to be optimistic about the long-term objective of abolishing abortion in Texas.

One of the MAJOR goals of AATX is to make the abolition of abortion a central issue in Texas politics.

The race for the Republican nomination in HD 91 shows us that this isn’t just a lofty dream, it is becoming a reality in Texas.

Though Lowe ultimately didn’t win the nomination, he made it clear to the Pro-Life establishment that there are MANY people in Texas who are fed up with playing political games with the lives of babies and want abortion abolished immediately.

He showed the establishment that if they want to continue regulating abortion like healthcare instead of abolishing it as murder… there is a literal price to pay. In fact, some are saying this was the most expensive House race in Texas history with Klick and those supporting her spending well north of a million dollars.

This race was being watched across the state and the message it sends to Texas lawmakers is that if you kill a bill to abolish abortion like Stephanie Klick did with HB 3326, it may be VERY costly.

This is a GOOD thing for future battles.

Keep us in the fight.
Become a Sustaining Member TODAY.

I Want AATX in the Fight!

House District 91 is not the only place we saw gains for this movement during Primary season.

We had more candidates than ever return the AATX Candidate Survey, which means we will be able to continue to hold more politicians accountable in the future.

This primary season, for the first time, we saw major candidates for Governor pledging support for abolishing abortion.

And we are seeing many people interested in getting involved at the grassroots level and helping us strengthen the stance of Texas Republicans at the 2022 state convention. We have lots of volunteers and delegates planning to join us in Houston specifically to be activists on this issue, and thousands of other delegates who support abolishing abortion immediately.

If you are working with us to abolish abortion in Texas, or across the country, you should be encouraged. We are seeing progress!

Some people think that abolitionists expect to abolish abortion overnight, in a single battle.

But this couldn’t be further from the truth.

It’s true that our call to public officials is always the same: abolish abortion immediately in obedience to God and submission to the Constitution.

We want equal protection of the law for preborn babies. Period.

Our message doesn’t change. We don’t compromise on what we are calling for. Ever.

When it comes to abolishing abortion, if we don’t call for what we want, we will never get it. It is really that simple.

Even so, we know that victory won’t come overnight.

Help us stay strong for the long haul.
Become a Sustaining Member TODAY.

I Want AATX in the Fight!

Even though this movement is growing, we are still small compared to the enormous evil we are fighting. The practice of child sacrifice has had over 50 years to flourish in this country and its roots go deep.

In Texas, we have seen some battles lost in the short term as establishment politicians kill our bills to abolish abortion and fight dirty to keep their positions of power. And there may be many more battles ahead of us that will be lost along the way to final victory.

But the outcome of the war is rarely told by the winning or losing of one battle … or even two, or three. Sometimes a loss becomes a rallying cry.

In Texas, we say, “Remember the Alamo!” That loss could have been the end of the story, but it wasn’t. Texans kept on fighting.

This is the time to keep on fighting!

This is the time for courage and persistence.

The path to victory is almost always lined with losses along the way. It takes people who are willing to make a sacrifice in order to make future victory possible. The fight to abolish abortion is one where we must be willing to lay down our lives for the sake of those who are powerless to help themselves.

This may mean fighting and losing some battles. For those like David Lowe, who commit to the battle, it may mean sustaining dirty attacks on your integrity and reputation.

But we need people in the fight who know that the cause we are fighting for is much greater than one election.

We need people who are willing to invest sacrificially even when a short-term win seems impossible.

We need people who will not give in or give up.

We need people who will lay down their lives for the least of these little ones like they would do for Christ Himself.

We need people who are in it for the glory of God and the love of their neighbors rather than for personal glory or political power.

What an encouragement it is to see more and more people like this joining the fight every day!

AATX is in the fight to abolish abortion for the long haul and we need YOU to invest in the work. Not everyone is able to run for political office but everyone can be a part of the fight.

People like you are changing the political landscape in Texas by becoming Sustaining Members and giving a monthly gift of $25, $50, $100, or even more to ensure that we have the resources we need to keep voters informed and hold politicians accountable.

Do you want AATX in the fight?

YES, COUNT ME IN!

This work is CRITICAL and is making a difference.

Please join us today with your monthly gift of any amount to be a Sustaining Member of this work to abolish abortion in Texas.