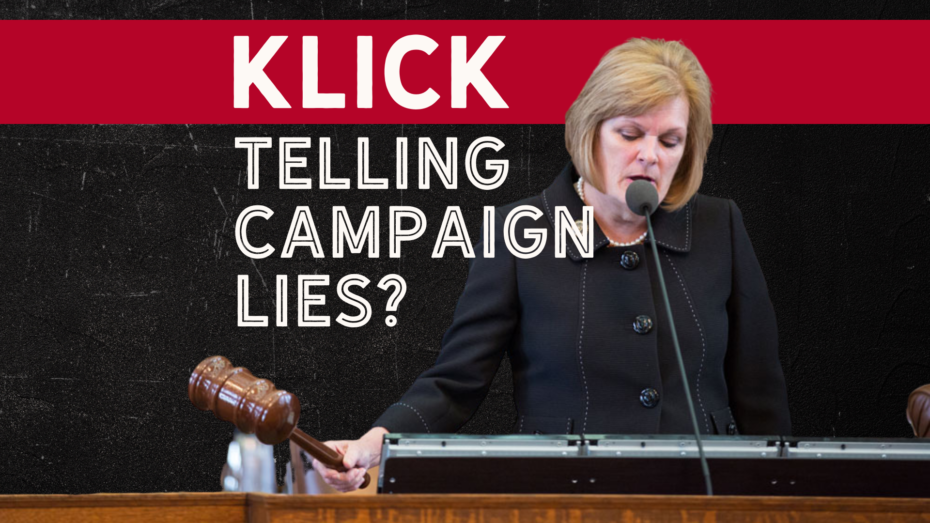 Incumbent Stephanie Klick’s campaign against abolitionist David Lowe for the May 24 runoff in HD 91 reminds me why so many people have given up on politics.

We want to honor and respect those who step up to be public servants… but then the cliché that you can’t trust politicians seems to be proven true 99% of the time.

Too often politicians can’t even be trusted to tell the plain truth. They say one thing and then do something else.

Is it too much to ask that our representatives say what they mean and mean what they say?

I don’t think it is.

The shady underbelly of politics is certainly being exposed in the HD 91 runoff, as incumbent Stephanie Klick continues to lie, misrepresent, and twist her opponent David Lowe’s words to make it sound like he is pro-abortion while she is the “Pro-Life Hero.”

Wait, what? Lowe is a vocal abolitionist of abortion, how could he be pro-abortion?

Well, he’s definitely NOT, but that didn’t stop Klick from running campaign ads and sending out letters to make voters question his commitment to abolishing abortion.

David Lowe isn’t hiding anything. He says exactly what he wants to do: abolish abortion. In fact, he says that he is willing to stand on the House floor and vote NO on any Pro-Life bill that would get in the way of or delay abolishing abortion. He thinks it is way past time to uphold the Constitution and end the murder of preborn children in Texas for good.

Klick would like you to think that all he said was that he would vote against Pro-Life bills, period, and she’s willing to deceive voters into thinking that’s the case. But it isn’t…

Lowe comes right out and says what he means without any devious double-speak because he means business on the issue of LIFE and isn’t afraid to say it clearly so voters can understand.

Lowe says, “The ONLY thing we need to do is abolish abortion. Period.”

And for this he is being villainized as a danger to Texas babies!

Klick, on the other hand, says she’s protecting life and presents herself as the “Pro-Life Hero” that Texas Right to Life claims she is, but in reality she actually killed HB 3326, the bill that would have abolished abortion in Texas.

That’s right, when a bill to COMPLETELY abolish abortion in Texas hinged on her approval as committee chair, she refused to give it a hearing.

Klick killed the bill that would have abolished abortion in Texas IMMEDIATELY and provided preborn babies with the equal protection of the laws. She chose instead to continue promoting the same kinds of compromised Pro-Life bills David Lowe says we need to stop wasting our time on and instead just ABOLISH ABORTION.

This kind of underhanded game should never be played with the lives of innocent babies!

The real danger to babies is that candidates like Stephanie Klick will keep getting approval and decorated as Pro-Life Heroes but never actually get around to abolishing abortion because they aren’t even really trying. They say life is precious and should be protected but then fight against the bills that would actually provide equal protection.

Just like many politicians, Klick says one thing, but then does something else, proving she can’t be trusted.

This type of deceitful, underhanded behavior is unacceptable for public servants in Texas.

That’s why we work hard to keep people like you informed. Candidates need to be held accountable for what they say and for what they DO.