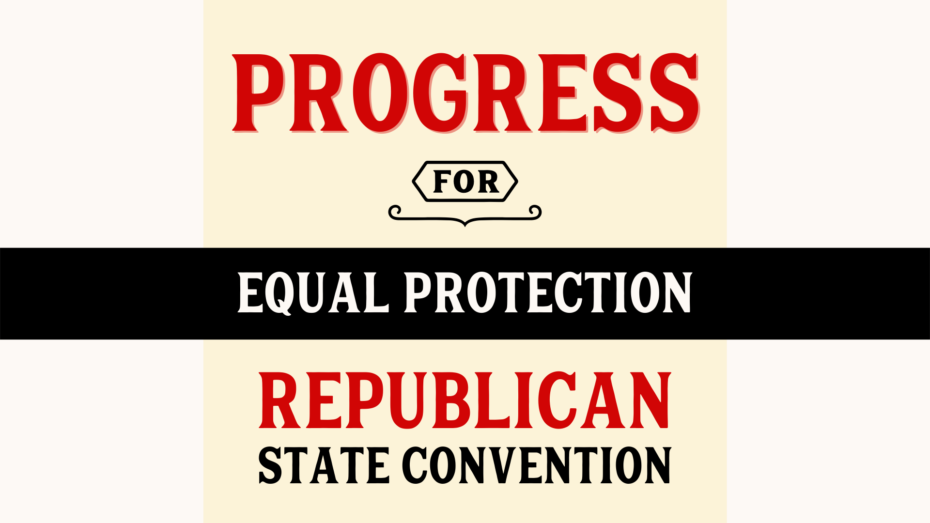 Our time in Houston last week at the Texas Republican Convention was an awesome SUCCESS!

It was so encouraging and humbling to be a part of the work that God is doing.

I believe this was our best Republican convention yet since we first advocated for abolition there back in 2016. That success is directly related to the 50+ volunteers who SHOWED UP in Houston to do the work and the hundreds of others who invested in this project to make sure we had the resources we needed to make a difference at this important event.

And we did make a difference!

AATX team prepping some of the volunteers for action and praying for the Lord’s favor.

The Platform and Legislative Priorities of the Republican Party of Texas (RPT) are stronger on abolishing abortion today than they ever have been before.

And we kept the strong ground on our party Principles.

We also kept the Ignore Roe plank in the RPT platform plus we ADDED an equal protection plank.

Plank 217. Abolish Abortion: Since life begins at fertilization, we urge the Texas Legislature to abolish abortion through enacting legislation that would immediately secure the rights to life and would nullify any and all federal statutes, regulations, orders, and court rulings that would deny these rights. 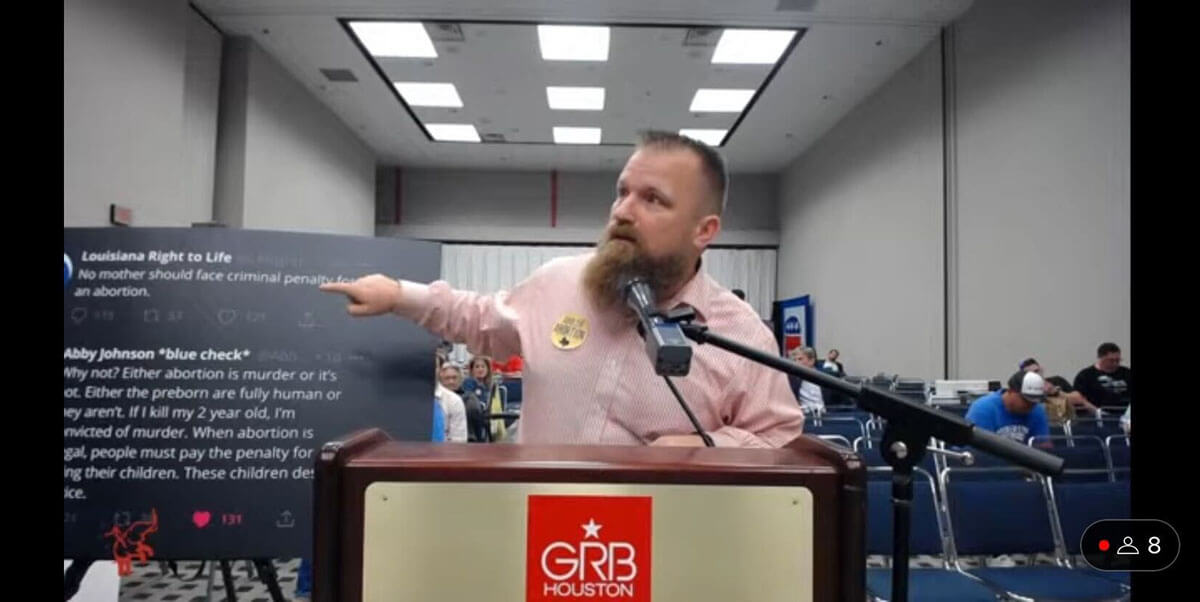 Going into this convention, we said there would be people within the RPT that would be fighting against us. We said that some Texas Republicans don’t want the equal protection of the laws for preborn babies. We said that some would be trying to weaken the stance of the RPT on abortion, even in a potentially post-Roe America.

And all of that came true.

There were so many people praying for God’s blessing on this project and on the work to abolish abortion in Texas. I know you were praying because so many of you told me you were. I am incredibly grateful for each of you who take the time to bring our work before the Lord and ask His guidance and blessing.

There are many pressing issues in our state and country right now, but I am happy to report that in addition to strengthening the Platform, Texas Republicans also kept abolishing abortion as a Legislative Priority for 2022-23, and strengthened it!

It now reads that the RPT Legislative Priority on abolishing abortion is to (new text in bold):

“Abolish abortion by ensuring the right to life and equal protection of the laws to all preborn children from the moment of fertilization, including adopting effective tools to ensure the enforcement of our laws to protect life when district attorneys fail to do so.”

There was so much talk about equal protection and effective enforcement at this year’s convention that this priority was strengthened. 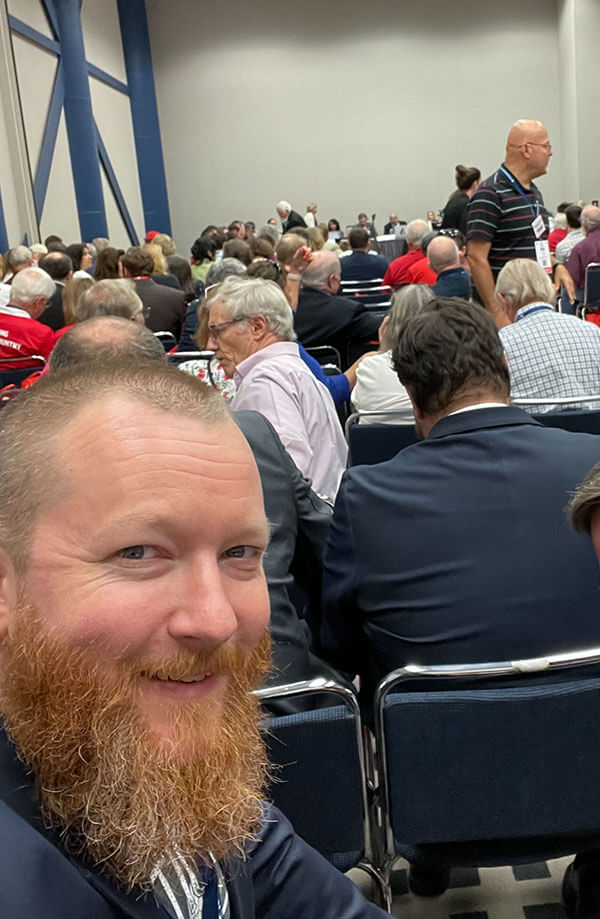 If you didn’t see the video of my testimony before the Legislative Priorities committee already, please watch it now. I hope you will be encouraged, as I was, by the dialogue between the committee members themselves and the excellent questions they were asking. People are really starting to understand equal protection!

I praise God for what He did at this convention through the faithful labor and investment of our volunteers and sponsors. 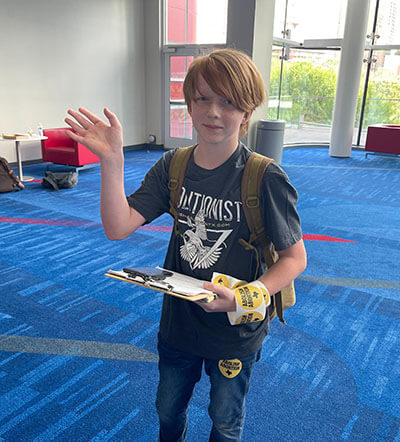 Cade, one of our many volunteers who worked hard to gather petition signatures.

They distributed over 7,000 of our pamphlets which included the Resolution to Abolish Abortion and answers to many questions about equal protection.

They distributed over 3,000 equal protection postcards.

They collected over 1,400 petition signatures from delegates which will allow us to communicate with these active grassroots leaders far into the future.

They manned our booth in the exhibitor hall and had MANY fantastic conversations with delegates, pastors, and even legislators who wanted to know more about equal protection and abolishing abortion.

They and other delegates stood to speak on behalf of equal protection before committees and during floor debate. And they spoke well for the glory of God and with love for their tiniest neighbors.

We sent texts on equal protection to over 7,000 delegates who were in attendance. Many of them responded favorably and we were able to dialogue with many others.

Seeds were sown that will inevitably bear fruit far into the future, as many people were challenged and encouraged to be more consistent and more biblical in their stance for life.

Glory be to God alone. 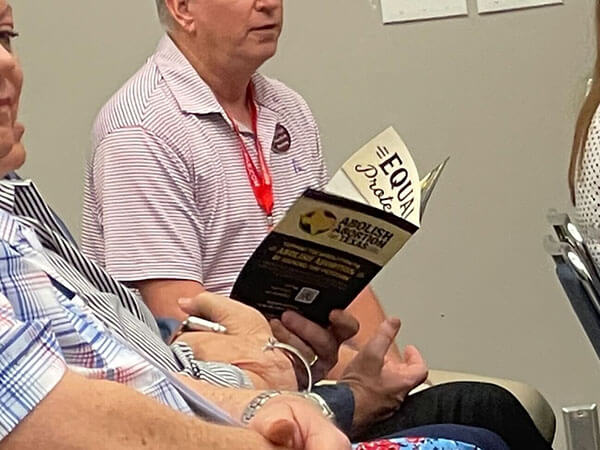 Thanks to the folks who funded the design and printing and the volunteers who passed them out, over 7,000 of these pamphlets were being read all over the convention hall! Praise God!

I was inspired by the passion, cheerfulness, and energy of these brothers and sisters as they served Jesus by advocating for the least of these among us.

It truly was a privilege to watch so many people work together on the ground at the convention and even behind the scenes for the weeks and months beforehand to make this the best convention ever for pressing Texas toward abolishing abortion once and for all.

There was a big impact last week because of the tireless and self-sacrificial work that was done. Delegates are taking equal protection way more seriously and understand the position way better than they did two years ago. Every conversation that was had and every speech that was given by abolitionists last week helped many more people understand the logical and biblical consistency of abolishing abortion

Our volunteers were busy at work and rarely in one place, but we managed to get a few of them to stand still for a pic.

At this convention, I got to see and be a part of love in action toward our preborn neighbors. I am deeply grateful to all the ones who SHOWED UP, all the ones who INVESTED, all the families who SUPPORTED those who came, and all the ones who PRAYED. We couldn’t do this work without God using ALL OF YOU.

I believe that God was greatly glorified by your faithful labors and cheerful giving. And I know my heart was greatly encouraged.

We are excited to see what God does with the seeds that were planted.

Thank you for standing with us in this fight until abortion is completely abolished in Texas.