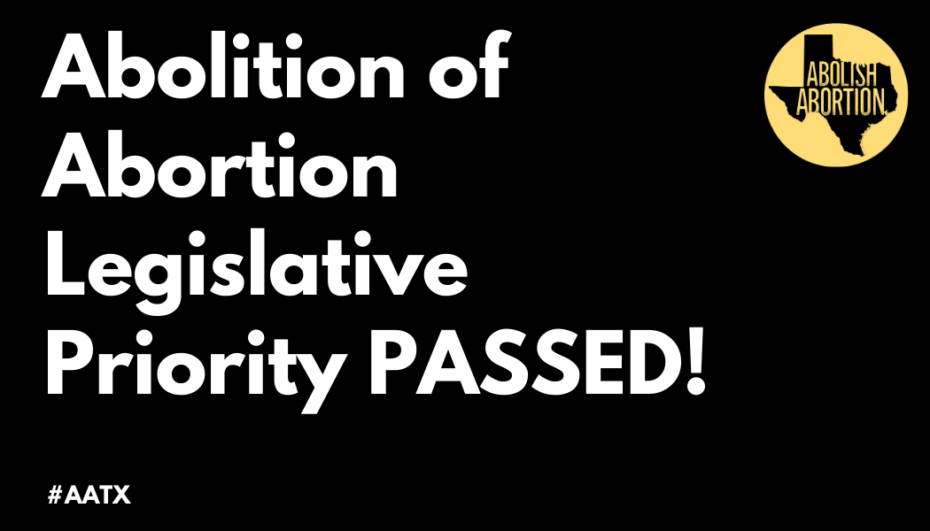 I wanted to take a moment to give a quick update on the tremendous progress you, by the grace of God, made at the Texas GOP Convention.

Thank you for your hard work. By preparing testimony, showing up, taking action, and lifting us in prayer, you helped move things closer toward the abolition of abortion in Texas.

I outline the victories God gave us below.

The big victory was keeping the Abolition of Abortion as a legislative priority for the Republican Party of Texas.

There was passionate testimony and debate – and, thankfully, the platform language, which was ultimately agreed upon, REMOVED the compromised language from 2018.

While well intended, it was important we eliminate reference to heartbeat legislation, which does nothing more than weaken the cause to truly abolish abortion in Texas.

We know that God’s breath of life enters into a preborn baby at the moment of conception, and we advocated on behalf of ALL children made in His image.

Even before their hearts are beating, we know He has given them life. The way heartbeat language is written, it inescapably bows down to Roe vs. Wade and allows for many kinds of abortion.

On top of that, the most conservative federal circuit court in the country, the Fifth Circuit, the circuit that includes Texas, has already struck down both a 15-week ban AND a heartbeat bill just in the last few months.

Plus, the Supreme Court has already considered and rejected upholding heartbeat legislation.

To put it simply, pursuing heartbeat legislation is, at best, a tragic waste of precious time and, at worst, would reinforce Roe and further delay the abolition of abortion.

I am thrilled to report that the legislative priorities of the Texas GOP will continue calling for the complete abolition of abortion, NOT a watered down compromise.

The language is as follows:

“Abolition of Abortion. Abolish abortion by ensuring the right to life and equal protection of the laws to all preborn children from the moment of fertilization.”

In addition to the language above, true abolition is about standing on the Constitution as a sovereign state and not settling for the crumbs the Supreme Court may let us have.

As shorthand, we call that “Ignore Roe.”

Unfortunately, the language we were seeking to ignore Roe vs. Wade was stripped out. However, while it didn’t meet the threshold necessary to keep the language in the platform, I am THRILLED that 34% of the delegates offered their clear support for putting it back in.

The language is still very good – just not as good as we wanted it to be.

But I have NO regrets. We left it all on the field, and we fought hard.

Incredible progress was made and I consider that a BIG VICTORY!

Finally, I want to congratulate Lt. Col. Allen West, the new Chairman of the Texas GOP.

You may remember that West previously only expressed support for ending abortion at 18 days or after the detection of a heartbeat.

It was you, AATX supporters, who helped him see the light about the problem with his stated position and helped him understand more about true abolition.

As I shared in my last email, I am thankful Lt. Col West has now expressed his firm and clear support for the abolition of abortion from the moment of conception, and has pledged to publicly support legislation to abolish abortion in Texas.

Please keep fighting, praying, and thanking the Lord for the victories that He has given us thus far.

And if you can, please consider chipping in $15 or $10 to help us keep the momentum going from this victory.

We MUST continue making abolishing abortion a central issue in the VITAL 2020 elections.

P.S. By the grace of God, your hard work won victories in the Texas Republican Party Convention! We made tremendous progress and I wanted to fill you in on how your hard work has paid off.

We have strong support from the official Republican Party legislative priorities platform, making the Abolition of Abortion a key issue.

And, after YOUR numerous contacts, the newly elected Republican Party Chairman, Allen West, has pledged his full support for legislation to do just that.

Now we must take this momentum forward and continue making ending abortion a top issue throughout the VITAL 2020 elections.

That’s why I hope you can chip in $15 or $10 to help us keep these victories coming!