Imagine a state passing a bill making it illegal to steal cars.

Then imagine that state announcing it would not be enforcing that law.

In other words, it would be technically illegal in that state to steal cars, but no one would ever get arrested or prosecuted for it.

You and I both know exactly what would happen.

Virtually every car thief in the country would descend on that state in a minute and steal every car they could get their hands on because they knew there would be no legal consequences.

Well, that’s kind of what’s happening in Alabama, but it’s not about stealing cars.

Remember me telling you a few weeks ago about Alabama’s bill to ban abortion?

Here’s what I said:

I’m sure you’ve heard by now that the governor of Alabama signed a bill last week declaring most abortions to be a felony. Let’s hope they stand their ground.

Well, I have some bad news.

Alabama is not standing its ground.

At least, its government leaders are not.

In fact, it looks like they never really intended to.

Before I get into the details, consider this fact:

Planned Parenthood is in the process–as we speak–of building a large new abortion facility in Alabama. 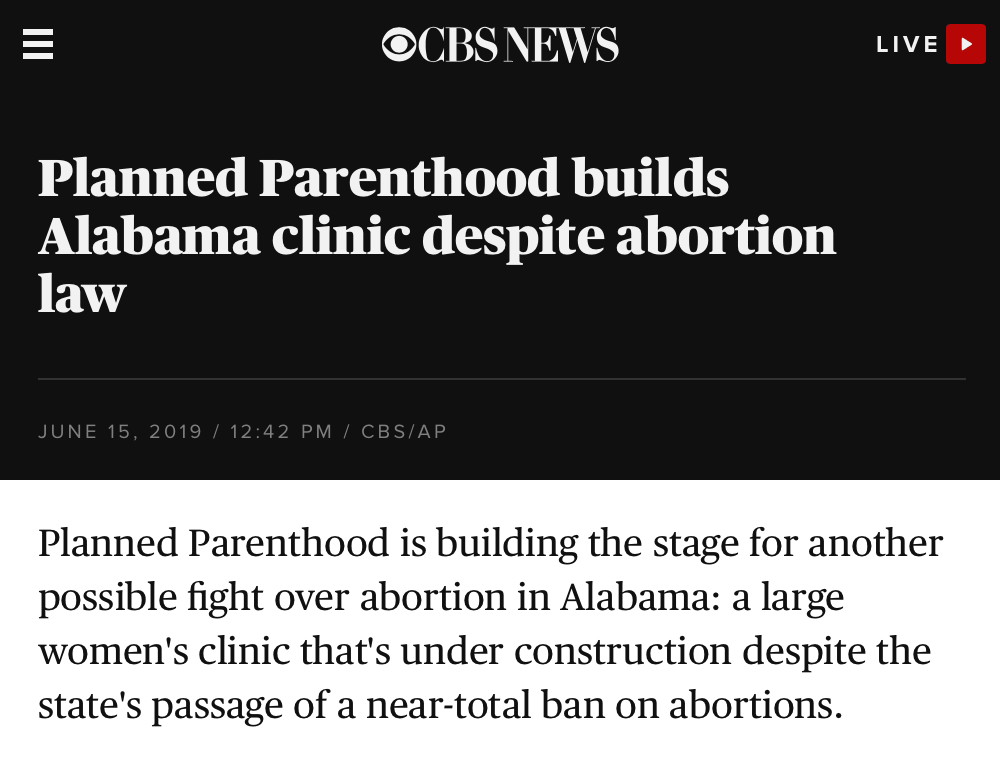 In the article, the Planned Parenthood spokeswoman even said there was “‘absolutely no slowdown due to the legislative session’ or the new law.”

But how can that be?

Terry Gensemer of Metro Birmingham Life Forum is quoted in the article wondering the same thing: “My question is after the bill passage, why are they continuing to be so aggressive when the possibility exists that they won’t be able to be in business?”

In other words, if Alabama passed a “near-total ban on abortions,” then why in the world would Planned Parenthood be building a brand new abortion mill there?

Something doesn’t add up.

So I did some digging…

…and I believe I found the answer.

Did you know that even before passing this latest bill Alabama already had an abortion ban on the books?

That means that what they passed was mostly unnecessary and redundant.

But it gets worse.

Like the imaginary state that “banned” stealing cars, Alabama passed a law banning most abortions, but at the same time they also declared they would not be enforcing that law.

Just read it for yourself.

Here is some of the text from the actual bill, HB 314, that Alabama just passed:

In other words, Alabama already had a ban on abortion, but the state refused to enforce it because of Roe v. Wade…

…so they passed another ban…

…that they also will not be enforcing.

Let that sink in.

In fact, Alabama’s governor, Governor Ivey, made this very clear in her official signing statement:

“To all Alabamians, I assure you that we will continue to follow the rule of law. In all meaningful respects, this bill closely resembles an abortion ban that has been a part of Alabama law for well over 100 years. As today’s bill itself recognizes, that longstanding abortion law has been rendered ‘unenforceable as a result of the U.S. Supreme Court decision in Roe v. Wade.’ No matter one’s personal view on abortion, we can all recognize that, at least for the short term, this bill may similarly be unenforceable. As citizens of this great country, we must always respect the authority of the U.S. Supreme Court even when we disagree with their decisions” (emphasis added).

What does that even mean?

Although most of the pro-life lobby is not telling any of us this, it means that the state just said that Alabama is committed to following Roe v. Wade until the Supreme Court says otherwise.

The bill Alabama passed and the statement their governor made just explicitly legitimized Roe v. Wade.

More than that, the bill and statement are a declaration of surrender to judicial tyranny and public notice that the state refuses to enforce the Constitution.

The governor explicitly said that Alabama “must always respect the authority of the U.S. Supreme Court even when we disagree with their decisions.”

Even when a decision is as unconstitutional and evil as Roe v. Wade, we must respect it?

Yes, according to the governor of Alabama.

If we have to “respect” and follow everything the Supreme Court ever says no matter how unconstitutional and evil it is, then why do we even have a Constitution?

And Planned Parenthood knows it.

That’s why, far from the bill discouraging Planned Parenthood from expanding further in Alabama, Alabama passing this “ban without consequences” was actually an open invitation.

But unlike in my imaginary example above, it’s not car thieves descending on the state, it’s professional serial killers.

Planned Parenthood is actually emboldened to open up a brand new facility.

But you were probably never told all this by most of the pro-life lobby.

No, they made it sound like Alabama had taken some bold stand when in reality they had passed a redundant bill that they never even intended to enforce.

This is what happens when the pro-life lobby compromises on principles.

They only deceive, confuse, and discourage people like us who love life and hate the murder of innocent preborn children.

Meanwhile, such open displays of weakness embolden our enemies.

And here’s the thing…

This is exactly why we’ve been losing.

Although we’ve been making some progress culturally, we have been losing the legal battle over abortion for 46 years because of fake stuff like this that sounds really great but actually reinforces Roe and makes the problem worse.

For 46 years, the pro-life lobby has been telling us that the Supreme Court needs to overturn Roe because it is UNconstitutional while also saying that states need to follow Roe v. Wade because, implicitly, it IS constitutional.

But which is it?

If it is unconstitutional, then not only should it be overturned but states should not even be following it–they should be following the Constitution.

But if states should be following it, then it must be constitutional which means it should not be overturned.

We can’t have it both ways.

It’s time to be logical.

If Roe is unconstitutional–and it is–then states should ignore it.

States should pass bans on abortion, and then they should enforce them.

It’s time to start following the Constitution by ignoring Roe.

The pro-life lobby needs to stop trying to pass fake bills that look nice on the outside and make great headlines but actually make the problem worse.

If you agree with me that it’s time to stop playing these kinds of games and making the problem worse, then I’m so glad to have you standing with us at Abolish Abortion Texas.

By God’s grace, I look forward to continuing to work and stand together with you to be uncompromising voices for the voiceless.

For truth, and for life,

P.S. If you like what you see Abolish Abortion Texas doing and standing for, would you be willing to chip in $25, $50, $100, or whatever you can afford? Almost every dollar you generously give will allow us to recruit at least one more person to this cause. And the more of us there are standing together, the more our state’s leaders will hear the volume of our collective voices as we cry out without compromise for those who have no voice.