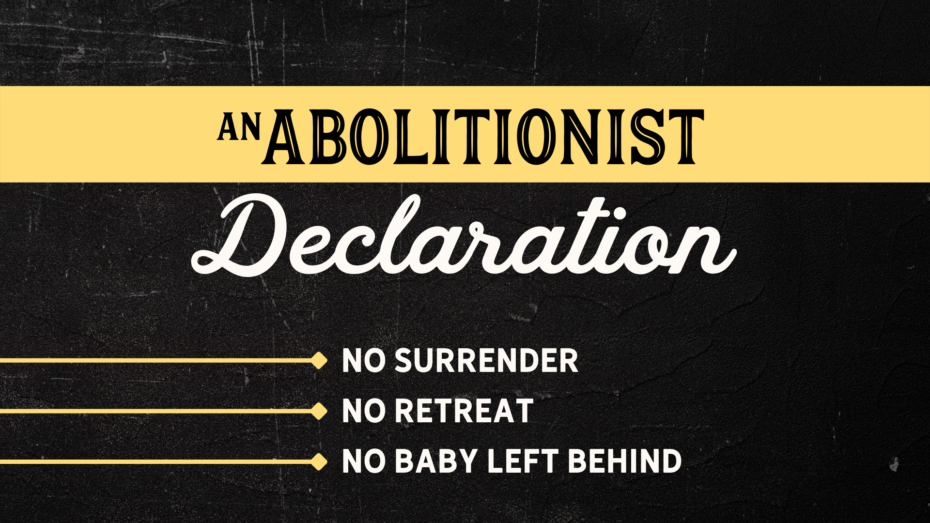 If you despise the evil of abortion and the way your preborn neighbors are violated every day in this country, you need to stop surrendering.

That’s right, you heard me.

I don’t know if you’ve noticed, but most Pro-Life politicians and organizations gave up a long time ago and openly operate as though defeat is our only option.

I’m here to tell you that it isn’t…

He’s all we need to win.

Christian, do you believe that your God is bigger?

Do you believe that the same God who rescued His people from slavery, parted the Red Sea, submerged the armies of Pharoah, and brought down the walls of Jericho by His own power can still be trusted today?

It will be HIS power, and only His power, that will defeat the evil giant of abortion in our land. Abortion will be abolished because God will do it through His people as we faithfully follow Him and work and walk in His ways.

Our God is far more powerful than the Supreme Court, the federal government, and Planned Parenthood. His strong arm isn’t weakened by abortion-loving politicians and worldly media giants.

The King of kings and Lord of lords doesn’t sit in the heavens wringing His hands and fretting over the power of wicked people.

In fact, Psalm 2 tells us that God sits in the heavens and laughs at nations and people who plot against Him in vain. He holds them in derision. Rulers of the earth are warned to “serve the Lord with fear, and rejoice with trembling. Kiss the Son, lest he be angry, and you perish in the way.”

God does not tremble before the wicked.

They should tremble before Him.

He is not cowering in fright and despair, and neither should we.

Christian, fear God and nothing else.

The call to us is the same as to the generations of faithful people who have gone before us: Be strong and courageous for the Lord your God is with you.

Do you know what that means in the battle against abortion?

Stop surrendering to the myth that the Supreme Court is god.

Stop surrendering to the myth that a woman has a right to an abortion.

Stop surrendering to despair and defeat.

Stop believing the lie that all we can do is beg the Court to allow us to write laws that dictate where and when and how babies may be murdered.

Stop celebrating when tyrants give us meager crumbs.

The Pro-Life industry has been giving ground to the enemy for 49 years. So much so that now they’re saying the best we can do for our preborn neighbors is to create some kind of incentives for their mothers to not kill them.[1]

Meanwhile, the abortion giant Planned Parenthood can sit back and thank most Pro-Life politicians and lobbyists for giving them the field as Planned Parenthood’s market share goes up with every compromised Pro-Life bill that passes and pushes out their competition. Pro-Life legislation regulating abortion like healthcare instead of outlawing it as murder feeds the giant.

This is pathetic and cowardly.

We must stop feeding a bloodthirsty giant with our faithless strategies and battle plans, and start trusting our God and obeying His commands.

Stop conceding to merely conserve and defend. We need to fight to take some ground. If we seek God’s will for His glory and by His ways He will bless it.

When God’s people stood on the borders of the Promised Land looking in, they saw giants, and they were afraid.

Caleb and Joshua trusted God and believed His promises and said, “the Lord is with us; do not fear them.”

But the people listened to their fear instead, and because of their cowardice they rejected God’s commands for how to fight their battle and they wandered in the wilderness for 40 years.

40 years is a long time, but Friend, we have been wandering in the wilderness and running from this battle for even longer than that.

It has been 49 years of ungodly compromise and faithless strategies.The blood of well over 60 million babies cries out to God from the ground of this country.

God, please have mercy on us!

Are you ready yet to trust in the Lord and lean not on your own understanding in this fight?

Are you ready to rest your faith in the power of God instead of the wisdom of men?

He is worthy of your trust. He always was.

Christian, both the pro-abortion advocates and the professional Pro-Life industry want you to be comfortable with compromise.

They want you to beg the Supreme Court that the chains of slavery be made lighter. They want you to see more clinical, less bloody versions of child sacrifice in our midst as victories for life …

…while our neighbors continue to be carted off to death: maybe earlier death, or less painful death, or cleaner death, but death all the same.

This is not okay. None of this is okay.

Christians must STOP SURRENDERING in this fight.

That’s why we started Abolish Abortion Texas (AATX) in 2016. The time for compromise and worldly-wise strategies is over. It should have been over before it ever started. We should be ashamed of this record: 49 years of bloodshed is 49 too many.

With God’s help, at AATX we are not going to give up one inch of ground on the right to life. Ever.

And we aren’t apologizing for our stand on principles.

I’m not apologizing that we want to defy Roe v. Wade, a tyrannical opinion of the most powerful court in the country. If anybody can do it, it’s Texas. And Friend, if there’s any issue to do it on, it’s this one. If we are not willing to draw a line in the sand here, where innocent preborn Texans are being murdered, then that phrase is meaningless.

I’m not apologizing for equal protection. God commands equal protection and the Constitution requires it. A baby’s life is just as valuable as my life. I am not any better than they are. The same laws that protect me should protect them. And anyone who says otherwise has been infected and blinded by their bigotry against preborn children.

The Bible tells us to be strong in the Lord and in the power of His might. That isn’t just a phrase to put on a coffee mug. It is the key to engaging the culture of death all around us … and winning.

We have strength when we are in the LORD. We stand strong when we are in HIS power and might. On our own we are weak and the giants will defeat us. But our God is strong and His ways are best because fighting His way means He will be with us. And if God is for us, who can be against us?

Christian, I want you to hear me. We will NEVER gain strength from worldly wisdom and cleverly devised strategies that endeavor to do evil that good might come. You cannot take ground in the fight when you’ve already surrendered all the high ground and are playing the enemy’s game by the enemy’s rules.

It is our duty as Christians to play by God’s rules. Always.

God really can abolish abortion in Texas. He has the power and the strength to abolish this evil faster than you might imagine. God doesn’t accept defeat. He is not contenting Himself with merely cleaning up how ugly this murderous practice looks.

I believe that the wrath of God is going to be hot and furious against this state if we do not repent of compromising with the lives of our preborn neighbors. We must repent of our surrender and our lack of faith in Him. We must trust that God’s commands are right and start doing our duty of providing justice to the fatherless.

We must speak the unadulterated truth of God to the Democrats, to the Republicans, to Planned Parenthood, the Supreme Court, the federal government, to our own Texas legislators, and anyone else who tries to compromise with God’s commands and the lives of our neighbors. We must tell them, “Kiss the Son, lest he be angry, and you perish in the way.”

The God who made us has given us the privilege to be WITH HIM in battle. He has made us ambassadors in His name. Have you thought about what an incredible honor it is that He puts His name on us?

Do not underestimate the awesome work that God will do when we repent of our fear and compromise and trust Him completely to bring about the VICTORY in His ways.

Stop surrendering. It is not befitting those who march under the banner of Christ.

Don’t cower in fear.
Don’t run from the field.
Don’t accept defeat.
Don’t negotiate with terrorists.
Don’t leave ANY babies behind.
Fight for them ALL, and fight to win.

Our God is an awesome God and He calls us to better things.

Christ is King, and it’s time to act like it.

If you agree with what I’ve said here, if this message describes your heart too, then SHARE IT.

We need to activate more Christians in this movement who have uncompromising faith in God and His ways and a sincere love for their preborn neighbors. If that’s YOU, then share this to every social media platform that you are on. Email it to your friends and encourage them to stand with us in this fight.

By God’s grace and in His power and strength, we can win!