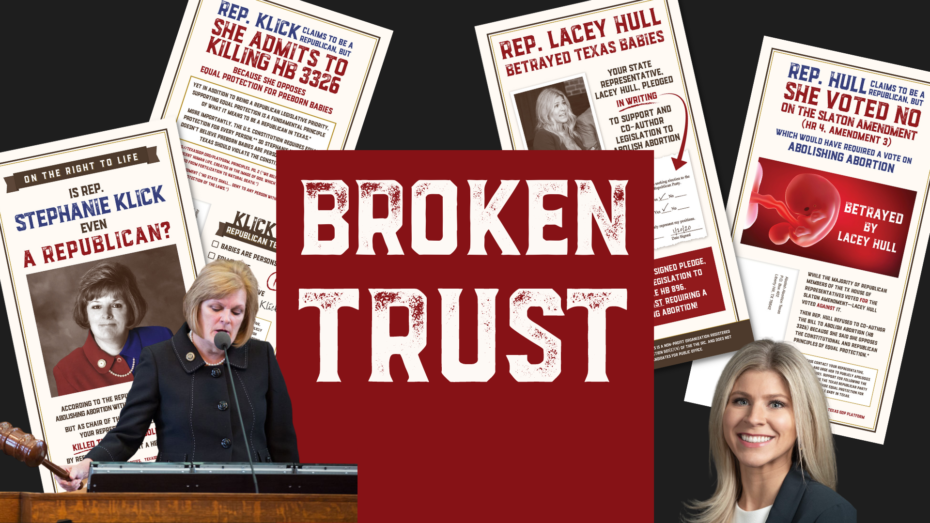 Around most elections, it sure sounds like babies are a top priority to Republican candidates.

But are they really?

When they want our votes, candidates are eager to talk about how Pro-Life they are and how much they believe in the sanctity of life. But have you noticed that campaign promises often don’t amount to much once the ballots are cast?

Here we are 49 years after Roe, in arguably the most Pro-Life state in the union, and babies are still not treated like human beings in Texas. Our preborn neighbors are denied the equal protection of the laws against murder which those of us who are born enjoy. And instead a host of discriminatory laws are passed which merely regulate when, where, and how precious children may be killed.

Even though the official stance of the Republican Party of Texas (RPT) calls for abolishing abortion and establishing Constitutional equal protection immediately, Republican candidates often refuse to listen to their own Party on this issue once they get in office.

Grassroots Texas Republicans have made abolishing abortion a legislative priority, but in Austin the lives of preborn babies still take a backseat to things as insignificant as naming roads and bridges.

Nevermind the tens of thousands of Texas babies each year who never get named at all because they are murdered and discarded as worthless trash rather than protected as precious children.

Well, we know preborn children are not worthless. They are created in the image of God and are just as valuable as you and me.

That’s exactly what AATX does with our yearly candidate survey. The AATX Candidate Survey gets candidates on record with what they pledge to do about abortion and allows us to hold them accountable once they are in office.

That’s exactly what we did recently for Rep. Stephanie Klick (HD91) and Rep. Lacey Hull (HD138). These are not Democratic pro-abortion candidates, they are self-professed Pro-Life Republicans who promise to fight for the babies.

In 2020, Lacey Hull returned our candidate survey with a 100% positive response. She pledged to co-author legislation to abolish abortion. But when the time came to step up and keep her pledge, she refused to co-author HB 3326. Even after we took time to personally meet with her and remind her of her pledge, Hull still refused to support the bill to abolish abortion saying she opposes the Constitutional and Republican principles of equal protection.

That’s right. Rep. Lacey Hull (HD138) outright opposes equal protection for defenseless preborn babies. She enjoys the protections of the laws against murder for herself, but denies them to babies.

To put it mildly, that’s messed up.

Pledges should be kept.

Babies should be protected.

That’s why we sent this mailer to Hull’s district to make sure her constituents are informed about how she broke her pledge and betrayed Texas babies. 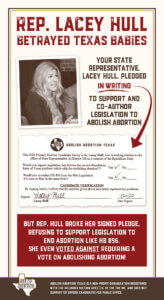 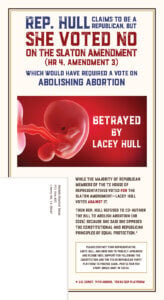 Hull betrayed babies and her promise.

Unfortunately, Hull isn’t the only so-called Republican who needs to be held accountable.

Some candidates like to hide their anti-abolition stance behind Pro-Life words.

I don’t know if you remember, but when HB 3326, the bill to abolish abortion, was waiting to be heard, Rep. Stephanie Klick (HD91) was chair of the committee and had the power to give the bill a hearing … or not.

What did she do?

Klick deliberately killed the bill to abolish abortion by refusing to even give it a hearing!

Remember now, Klick isn’t a pro-abortion Democrat. She claims to be a Pro-Life Republican who is fighting for the babies.

But that’s exactly what she did.

And her constituents need to know about it—which is why we sent a mailer to her district as well. 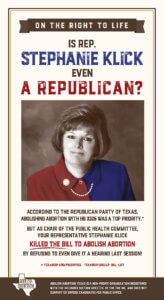 Rep. Stephanie Klick (HD91) killed the bill to abolish abortion by refusing to give it a hearing. 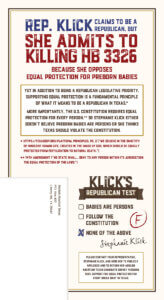 Klick will not abide by the Platform, Principles, and Priorities of her own Party.

Voters need to know what their candidates are actually doing.

Making sure voters are informed about this kind of betrayal is guaranteed to kick up a stir—people take notice. These mailers made enough of a splash to be mentioned by the Texas Tribune, Dallas Morning News, and Fort Worth Star-Telegram.

Keeping voters informed is incredibly IMPORTANT to the work of abolition.

Betrayals like this must not be left in the dark—they must be exposed.

That’s why we need your help. Doing the CRITICAL work of getting candidates on record and keeping voters INFORMED is expensive.

AATX is committed to getting the facts to the people who need to know.

We do that with direct mail campaigns like the mailers above, but also by making phone calls to targeted districts and running ads on social media. All of this costs money which is why we are grateful for all the Texans who are standing with us in this fight and making sure we have the resources we need to keep voters informed.

There are two ways you can help:

Thank you for standing with us to abolish abortion.