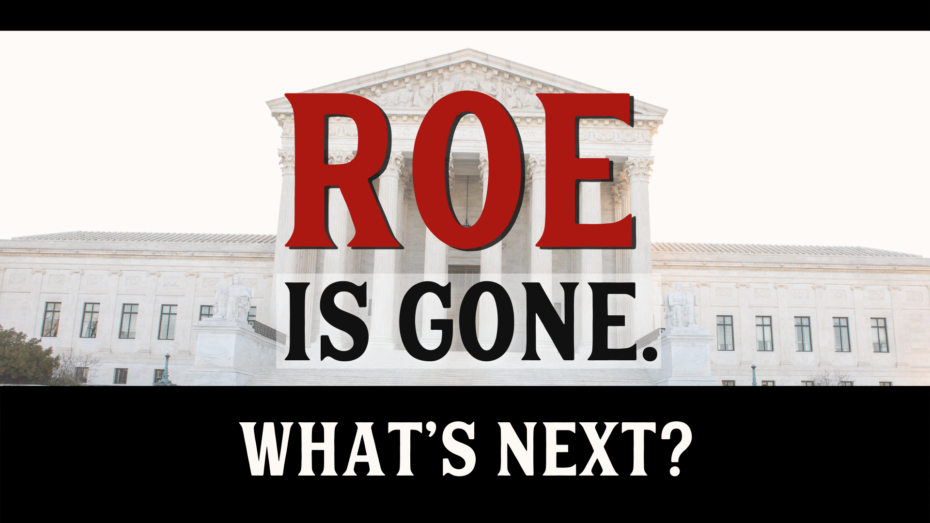 The overturn of Roe v. Wade is surprising on many levels.

Nearly 50 years of judicial tyranny was upended by the Court itself.

While I was privileged to write and file a brief with the Supreme Court urging it to overturn Roe, many of us weren’t sure they really would do it this soon. The Supreme Court had such a history of reaffirming and doubling down on Roe that it is still shocking that they finally admitted they were wrong.

The Supreme Court finally agreed with us that their previous opinions in Roe v. Wade and Planned Parenthood v. Casey were not Constitutional and therefore not binding on the states.

Glory be to God!

If there’s one thing we have seen in all this it is that truly, “The king's heart is a stream of water in the hand of the Lord; He turns it wherever he will.”

I both rejoiced and wept when I heard that Roe was overturned.

I was born into a world tyrannized by that ungodly decree while many of my peers were not even born at all. And now Roe is gone.

It’s difficult to even process.

First came joy for the destruction of an exceptionally evil decision. Praise God!

Followed quickly by sorrow for the 63 million image-bearers of God whose bodies were left in its wake. God, forgive us.

But even with Roe out of the way, looking forward my spirit remains disturbed because babies are still unprotected in ALL 50 states. And many people seem to be overlooking that fact as they celebrate Roe’s demise.

There is an ebb and flow of both celebration and mourning in my heart as this new reality sinks in. And maybe that’s how it should be.

Though we rejoice at the toppling of Roe, one thing we know for sure is that abortion has not been abolished and the battle is far from over.

In fact, we may be much earlier in the overall battle than many people realize.

Our situation right now is this.

In nearly 50 years of fighting, not one single state stood up to the judicial tyranny of Roe.

I wonder what the states will do if a future Court reinstates Roe? Flip one vote on the Supreme Court and we could get Roe (or worse) right back again. Will we decide then to ignore unconstitutional and evil decrees like we should have done with Roe all along? Will that be our moment of courage?

Or what if Congress passes a bill codifying Roe? With HR 3755, they actually tried to do worse than that recently by prohibiting all abortion restrictions. It already passed the U.S. House. The only thing that has so far kept it from passing the Senate is the filibuster rule and the vote of one Democrat Senator who says it goes too far, even while he says he would vote to codify Roe if a bill came up to do that.

Both of these possibilities are closer than many would like to admit.

And because no state had the courage to stand up to Roe and choose to honor God and follow the Constitution, not one state has passed a bill of abolition to provide Constitutional equal protection for preborn babies.

For all those years, the states simply submitted to the unconstitutional Roe decision and treated abortion like healthcare instead of abolishing it as murder. Because of that, more than 63 million lives have been lost. And that number continues to grow. Because, not surprisingly, much of America has internalized those laws and now actually believes that abortion is healthcare and not murder.

On top of that, right now in America, all 50 states protect the conduct of mothers who abort their babies themselves at any time during pregnancy, right up until the moment of birth. So-called “self-managed abortion” remains “legal” for mothers from sea to shining sea whether your state is red or blue. Coat-hanger abortions may have become a thing of the past, but killing by pills at home is the wave of the future. And as a top story in the New York Times shows, the future is here. 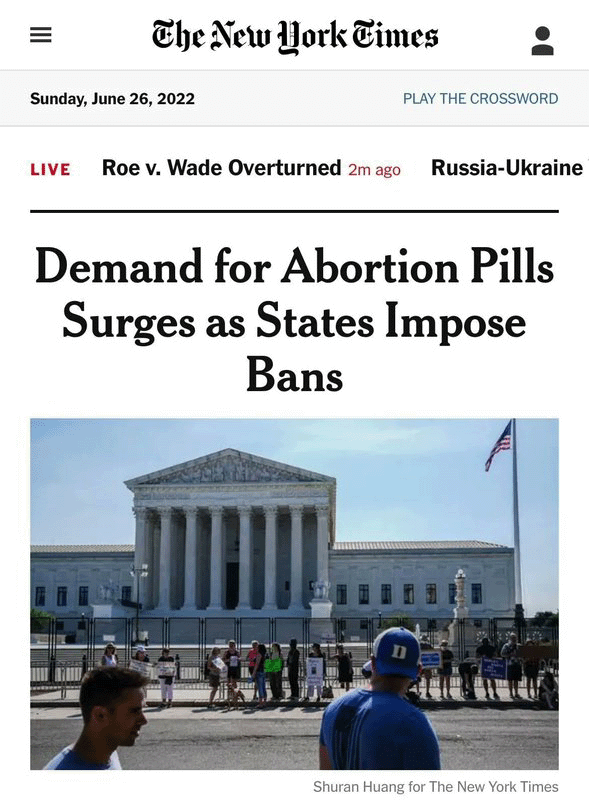 As you can see there is still a lot of work to be done.

I am not trying to be the storm cloud on everyone’s sunny day. The reversal of Roe is a GOOD thing. I give thanks and praise to God for turning the hearts of those judges and reversing that evil decision.

But I do want to put some perspective on where we are in the fight.

Are you a church leader? Get equipped to lead in this fight.

Post-Roe: Where are we in the fight?

First, the Supreme Court did not abolish abortion in Dobbs. Although they had the constitutional authority to hold that states MUST provide equal protection—as we urged them in our brief—they instead chose to abandon their authority and try to wash their hands of the matter (of course, it didn’t help that Mississippi had not even asked the Court to find that a preborn child is a person deserving of equal protection).

The Court did take a big step in the right direction by overturning Roe, but they neglected their constitutional duty to hold states to the constitutional requirement to provide equal protection. In a future case, we plan to go back to the Court and urge them—again—to do just that.

Second, our current situation AFTER the overturn of Roe is similar to the point where British abolitionist William Wilberforce was BEFORE he first started introducing legislation to fight the slave trade in 1789. At that time, slavery wasn’t legal on the British isles but it was in its colonies and the slave trade flourished throughout the British empire.

Wilberforce didn’t successfully accomplish the abolition of the slave trade until 1807 and the institution of slavery itself wasn’t abolished until 1833. His legislation was introduced and defeated many times before victory came.

Similarly, while assisted abortions may now be illegal in some parts of our country, they are not in other parts.

To bring things closer to home, we could say that 21st century abortion abolitionists are at a similar point in our work of abolition to the abolitionists of slavery in America prior to the civil war. In antebellum America, each state made its own laws regarding slavery. At that time, there were no federal rulings, statutes, or decrees to interfere with states regulating or abolishing slavery. Each state did what was right in its own eyes.

Which is pretty much where we are now with abortion in America.

After the reversal of Roe, the federal government may have stepped back from interference for now, but abortion still isn’t abolished in every state. In fact, it’s not abolished in any state. At least before the civil war, slavery really had been abolished in some states. But we aren’t even that far along in abolishing abortion yet.

While we are glad the Court is no longer telling us we may not outlaw abortion, we must realize that our fight for abolition is far from over. We are probably closer to the beginning of this battle than we are to the end.

If we were on a football field, you might say we got a first down but we are still far from the endzone. Can we celebrate a first down? Sure!

But it would be foolish to act like we’ve won the game.

We haven’t won the winning touchdown…

The overturn of Roe is really just the end of the beginning.

I don’t say this to discourage those of you who are new to abolition or to diminish the work of those who have already been in the fight for decades. I say it because the work laying in front of us is still a long way from over.

What can you do?

Abortion needs to be abolished in all 50 states for the glory of our God and for the love of our littlest neighbors. Even with Roe out of the way it won’t be an easy fight.

We need to be urging the Supreme Court to take the next step and hold that states must provide equal protection.

We need to be urging Congress to exercise its power under the 14th Amendment to enforce the equal protection clause and require states honor it.

We need to be passing bills in every state that remove abortion exceptions from state homicide codes so that persons before birth are protected by the same state laws protecting persons after birth.

Now is not the time to hang up your armor and go to sleep.

Now is the time to dig in and press on.

Now is the time to banish fear and crush apathy.

Now is the time put aside worldly wisdom and pragmatic half measures and to wholeheartedly trust God and do His will His way.

Friend, if it was Roe that was standing in your way before, that hurdle has been demolished and lies in the rubble. What is your excuse for standing idle now?

Now is the time to joyfully join the ranks of abolitionists across the country to fight for equal protection for every preborn baby from the moment of fertilization and for nothing less.

There is so much work to be done. It is not time to go to sleep.

That’s why the Foundation to Abolish Abortion is hosting a FREE one-day Church Leaders Conference in Houston, Texas on Friday August 19.

Share this info with your church leaders TODAY and invite them to come!

The Church needs to be in this fight stronger than ever. The Church must lead.

Our goal is to prepare church leaders and pastors to equip their congregations for the work of abolishing abortion for the glory of God.

Friends, it is time to keep fighting and fight to the finish.

Are you ready to gird up your armor and keep fighting?

No surrender. No retreat. No baby left behind.