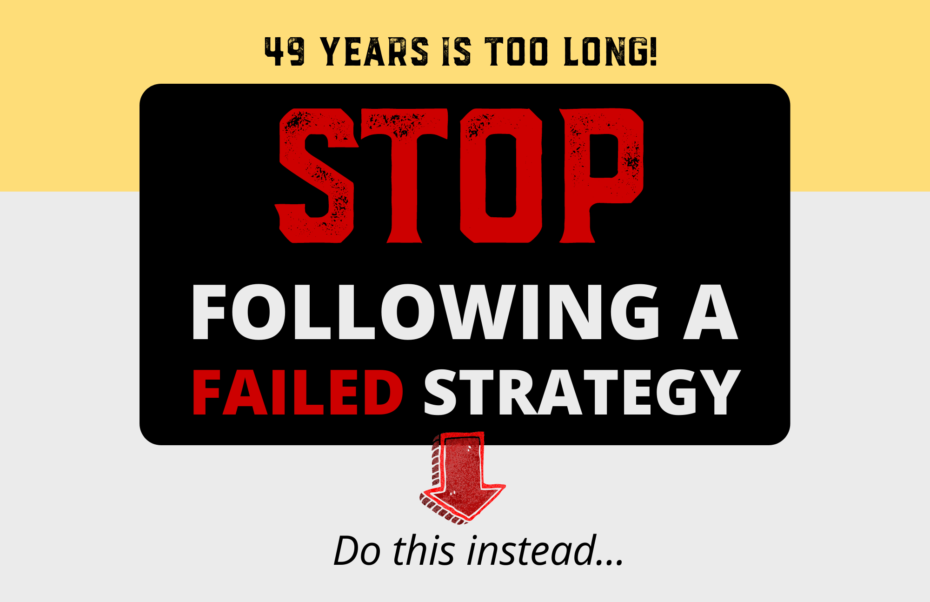 Today marks that shameful day in history when the Roe v. Wade decision was handed down from the highest court in our land. It has been 49 years.

This is not an anniversary to “celebrate,” though there will be many people cheering in honor of so-called women’s rights.

The truth is that the Roe decision, and states’ compliance with it, can only truly be characterized as the ongoing genocide of preborn Americans.

Our attitude on this day should be one of repentance, fasting, and prayer, not celebration of “women’s rights” or even the “successes” of the Pro-Life movement.

Every passing January should be a sharp reminder that babies are still being murdered in defiance of both God and the Constitution and under the protection of our laws. Thousands of preborn Americans are relegated to the trash heap daily. We have not succeeded.

As I told you in my last email: the primary Pro-Life strategy has FAILED.

Focusing on electing Republican presidents to appoint conservative justices to the Supreme Court to overturn Roe, has been a massive failure…an empty promise.

I don’t say this to discourage you. I say it because there is a better strategy we need to be following. We don’t need to keep following the same failing strategy and LOSING.

We must move beyond a strategy that has proven to be a complete disappointment, and choose a strategy that honors God and the Constitution. Only when we honor God in all our efforts may we sincerely expect His blessing on our work.

So what do we do instead?

We inform the Court of their duty before God to establish justice without partiality and their oath-bound duty to uphold the Constitution which requires states to provide the equal protection of the laws to all people. That’s exactly what we did in the Friend of the Court brief I filed in the Dobbs case.

What good will that do? It will do good because it honors God, and honoring God is the primary strategy.

It is the duty of God-fearing Americans to call on those who are in authority over us to be obedient to God or risk subjecting the nation to His judgment.

It is also our duty to remind public officials of their duties and oaths of office. Supreme Court justices swear an oath to uphold the Constitution. In the United States the judicial branch of government is subject to the authority of the Constitution. When Roe v. Wade was decided, the justices on the bench ignored their oaths and duties. They ignored the Constitution and issued a lawless opinion. And most justices who have been placed on the Court since have followed suit by strengthening Roe instead of overturning it.

If we don’t hold public officials accountable for their God-given and Constitutional duties, who will?

But the strategy doesn’t end there.

Our Friend of the Court brief also puts the Court on notice that if they do not do the right thing and overturn the evil Roe v. Wade decision, then it is the duty of state and local authorities to IGNORE ROE.

It is important for Christians across the nation to stand together and show the Court that we expect them to respect the oaths they took to uphold the Constitution or we will IGNORE their lawless opinions.

That is why I am asking you to add your name to our legal brief!

Many other Americans have signed their names already, including 21 organizations and 20 state legislators.

When you sign, your name will be added to the list of supporters that the Supreme Court justices can view when they read the brief.

This case isn’t expected to be decided until June of this year, so it is critical that we gather as many people as possible to add their names in support. We want to show SCOTUS that there is tremendous support for IGNORING Roe if they choose to reaffirm Roe once again.

If you haven’t already signed, add your name to the brief TODAY!

This is an incredible opportunity to be seen and heard by the Supreme Court of the United States on this issue, and our brief contains a perspective that NO ONE else is sharing with them. SCOTUS needs to hear what we have to say.

If you have already signed, thank you for joining us, we cannot do this work without the support of people like you.

We want to add the names of thousands more Americans to our brief while the justices are deliberating on the Dobbs case.

But it takes resources to beat the social media giants who want to cancel this message. There are many people who are tired of the same strategy that has been failing for 49 years and who want abortion abolished once-and-for-all. Help us reach them!

If you want this message to get out to as many people as possible, please help us by chipping in $15, $25, or even $50 so we can find more people like you to join us.

Thank you for standing with us in this fight!