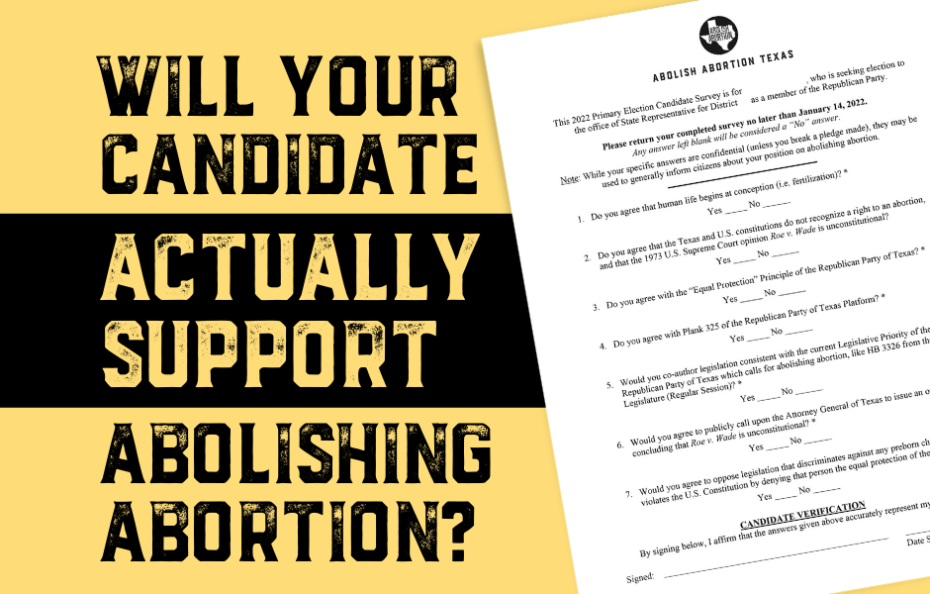 Texas is considered one of the most conservative Pro-Life states in the nation.

And yet every year tens of thousands of preborn children are still murdered under the protection of Texas laws.

Does that seem right to you?

In 2021, Texas made national headlines for our Heartbeat Act which, among other things, outright discriminates against the youngest and weakest babies entirely by denying protection to babies without detectable heartbeats.

And then the Heartbeat Act goes on to specifically prohibit civil authorities from doing their God-given and Constitutional duty of exercising justice on behalf of the other babies who are supposedly gaining protection by this law. And there is so much more wrong with the bill.

Yet that is the type of legislation that so-called Pro-Life politicians are cheering for these days.

How does this happen?

It happens because politicians pursue worldly strategies to defeat the evil of abortion instead of trusting that God’s ways are best.

It happens because we have believed the lie that evil laws can actually be stepping stones to justice. As citizens and voters, we have become accustomed to politicians compromising righteous principles in order to “make progress.”

It happens because we believe every politician who tells us that they are doing all that they can do.

It happens because almost no one is asking the questions that need to be asked and politicians aren’t being held accountable like they should be for keeping their campaign promises.

That’s why AATX works hard to get political candidates on the record so we can inform you about where they stand. And so that people like you can know who you need to talk to and hold accountable for what they say, and more importantly, what they DO.

In fact, we recently mailed our AATX Candidate Survey to candidates for the legislature and for major statewide office in Texas, and candidates are beginning to return those surveys as we speak.

This is the work that has to be done if we want representatives in office in Texas who are actually going to work to abolish abortion.

That’s why our surveys are so important. AATX is asking the questions Pro-Life establishment organizations don’t want to ask.

We want to know if Republican candidates actually support the Principles, Priorities, and Planks of the platform of the Republican Party of Texas (RPT) which call for the abolition of abortion as a legislative priority and affirm the need to establish equal protection under the law for preborn babies.

AATX has worked hard on the grassroots level to get the priorities of the RPT strengthened to reflect the value that every single preborn child has from conception as a person created in the image of God.

We have fought, and continue to fight, to help establish consistent God-honoring principles for Texas Republicans to follow as we fight for the lives of our littlest neighbors.

But if Republican candidates and elected officials disregard the principles and priorities of their own party, and we let them get away with it, what does it matter?

That’s why we sent out the AATX Candidate Survey. And the responses are already starting to roll in!

We want to inform people like you about what candidates are pledging themselves to do.

And then we want to keep you informed when those representatives follow through on their word OR when they break their campaign promises.

Friend, do you want to know where your candidates stand on these critical questions?

The legwork of getting candidates on the record so that we can keep voters like you informed is critical and we want to keep doing it.

To help us with this critical work, would you be willing to chip in $15, $25, or even $50 today? Your investment right now will increase the work we can do during this important season leading up to the elections.

This is the time to find out where these candidates stand, and for Texans to let them know where we want them to stand, because now is the time when these politicians are most interested in listening to “we the people.”

Your support will help enable us to cut through the barriers of social media censorship and deliver the facts on where candidates stand to you and other voters.

In spite of all the Pro-Life laws which have been passed since Roe v. Wade, more than 50,000 innocent preborn children are still murdered in Texas every year because our laws deny them justice and equal protection.

This is unacceptable and we want this to change. I believe you do too.

P.S. Candidate surveys are a crucial part of the work we do. Right now, when they want our votes, politicians are the most interested in hearing what you have to say. That’s why we need to find out where they stand and let Texans know so YOU can let the candidates know where you want THEM to stand. Please make your most generous donation today to help us get candidates on record and to help us get the message out to Texans across the state!