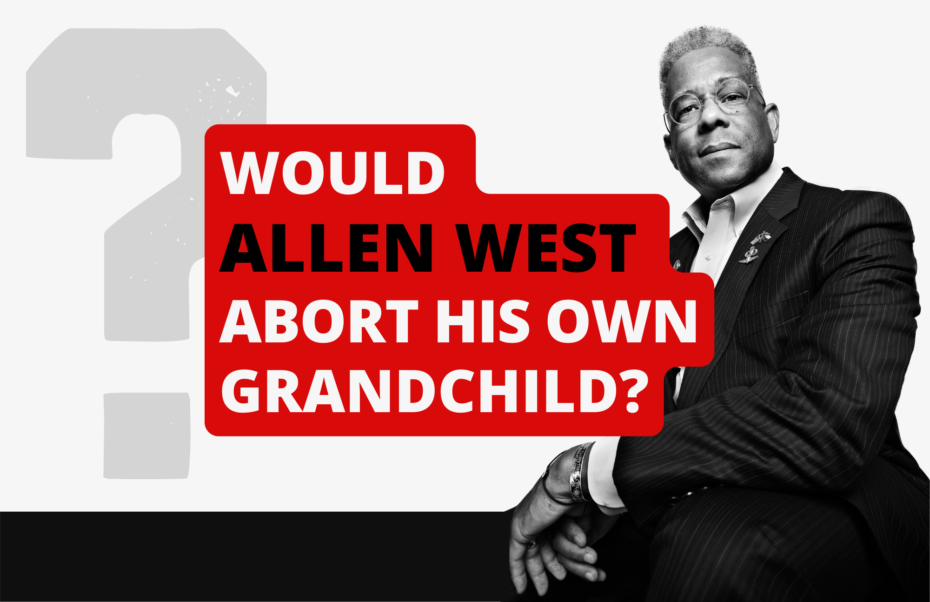 How do you know if a political candidate truly believes that a “fetus” is a person who is equal in value to you and me?

Of course, there is no way to know for absolute sure. Only God knows their hearts.

But the first step is to listen to what they say.

Last week, Allen West, candidate for Texas Governor, made it clear that he doesn’t really believe that a preborn child is a person, even if it were his own grandchild in the womb.

Watch this 39-second video to hear for yourself what West said:

Did you watch it?

He explained that if his own daughter became pregnant from rape, he would want the power to end the life of that child after discussing it “with God and with family.”

To anyone who may try to claim this video is out of context, West is answering the question you can read at the bottom of the video, and yes, that was his whole answer.

Friend, there is nothing compassionate about what he said.

Should we execute an innocent child for the sins of her father?

Do two wrongs make a right?

…and regardless of whether “the people” tell you to allow baby-murder or not.

That’s not leadership, and it’s certainly not godly leadership.

And children conceived in rape are the MOST fatherless among us.

Should we discriminate against a person—to the point of murdering them—merely because of the circumstances of his conception?

The Republican Party platform supports equal protection for “all preborn children,” no exceptions, and explicitly condemns discriminatory abortions (BTW, all abortions are discriminatory).

That’s why this answer by Allen West makes it clear that he doesn’t actually believe that a fetus is a person.

Unfortunately, this is not the first time he has said something like this.

I’ve written before about how his campaign website says he is pro-”choice” (his word) when it comes to murdering a child conceived in rape.

Frankly, he has been open and unapologetic about this position for a long time.

And he’s not the only one.

Current Governor Greg Abbott has boasted that the Texas Heartbeat Act still “provides at least six weeks for a person to be able to get an abortion” in the case of rape (and for any other reason).

Of course, Governor Abbott has a long history of failing to lead on this issue, including breaking his promise to outlaw abortion he made to a dying 16-year-old, Jeremiah Thomas.

If you’ve ever wondered why abortion has not yet been abolished, look no further than how these political candidates are speaking.

We have to do better.

We will never win this war against abortion until we truly believe that a fetus is a person made in the image of God, with a life equally as valuable as yours or mine, and entitled by God and the Constitution to the equal protection of our laws.

We must not tolerate politicians standing for anything less.

The stakes are too high.