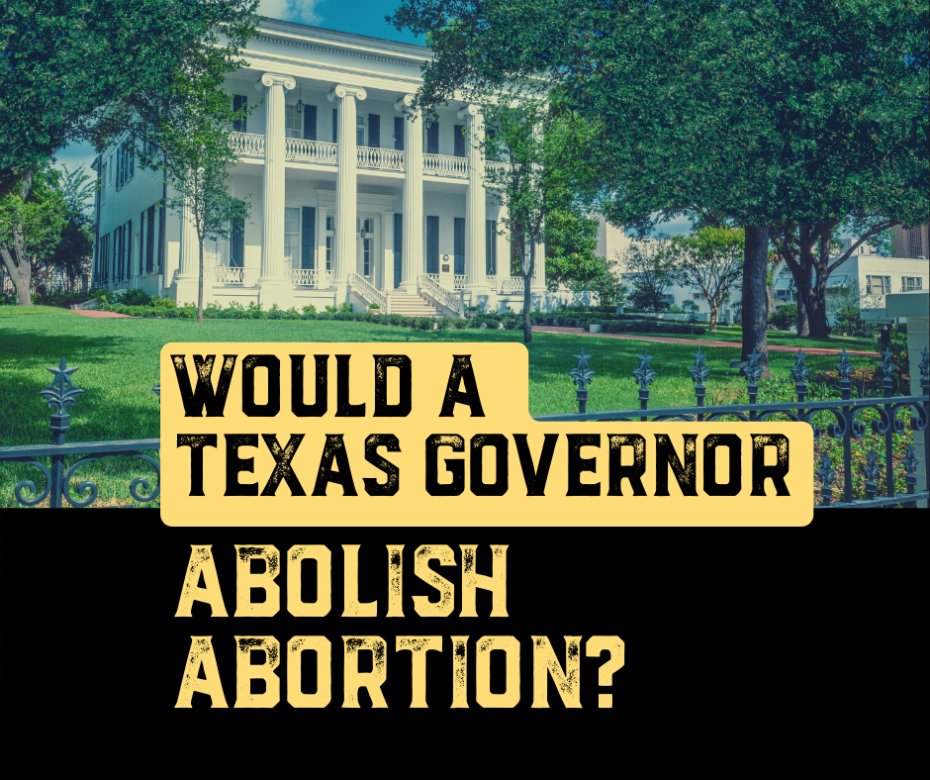 I’ve been telling you lately about signs that the conversation on abortion is changing in Texas.

I believe our voices are being heard. It may not always feel like it since we haven’t gotten any of our bills to abolish abortion in Texas passed yet.

But there are sure signs everywhere that people are taking notice of our talk about equal protection and abolishing abortion.

Recently I pointed out how Pro-Life leader Abby Johnson started talking about “Defying Roe.” That was pretty encouraging, and we pray that she would start publicly supporting our bills to abolish abortion here in her home state of Texas.

But most Pro-Life lobbyists and legislators continue to act like, “Roe is the law of the land.”

Thankfully, things are changing in some promising ways …

In the current governor’s race we see it again …

Former state senator Don Huffines, one of the leading candidates for the Texas governor’s office, had no problem Tweeting this to all his followers: 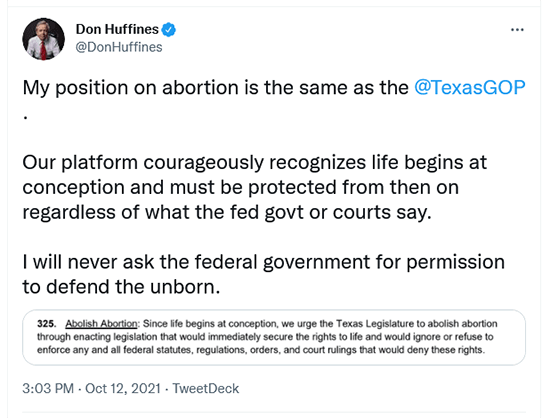 I was excited to see a Republican candidate actually standing by the platform of the TXGOP.

“Since life begins at conception, we urge the Texas Legislature to abolish abortion through enacting legislation that would immediately secure the rights to life and would ignore or refuse to enforce any and all federal statutes, regulations, orders, and court rulings that would deny these rights.” (Plank 325)

That is a great, God-honoring platform plank for Texas to have.

And do you know why that plank was set in the first place?

Because people like you cared enough to show up alongside AATX year after year to do the work necessary to make that plank part of the Texas Republican platform since we first pushed for it in 2016. Many of you also stand with us as Sustaining Members to help us continue this work.

It is great to see the efforts of the past few years bearing fruit now! I thank God for how He uses each of us in this work even when it seems to us like change is slow.

When I went to the Huffines for Governor website to see what else he had to say, I found some more encouraging signs.

“It’s time to stop playing around with this issue.

“So many Republicans want to say all the right things and pass some sort of “pro-life” bill every two years to campaign on while ignoring the fact that children are losing their lives.

“As a Christian, my stance on this issue will never change. As Governor, I will abolish abortion in Texas, and I’m not waiting around for a gutless Supreme Court to give Texas permission to protect our children. As a Senator, I had a 100% pro-life voting record, but honestly, I wish I had done more.”

Friend, this type of statement from a candidate for Texas governor is a VERY good thing.

He is absolutely right. It is time to stop playing around.

Preborn children shouldn’t be used as political pawns or cliché campaign slogans to get votes. They are human beings created in the image of God and we need to take seriously our duty to protect them!

The truth is that Texas leaders are not taking this duty seriously. For nearly 50 years, Texas has been submitting to Roe, an evil, unconstitutional court opinion, instead of fulfilling the God-given duty to protect innocent children.

Senator Huffines says he wants Texas to, “stop bowing down to the federal courts.”

The one thing I can’t tell from what he’s said is whether he would fight for equal protection. As far as we can tell, Senator Huffines hasn’t publicly confirmed a commitment to equal protection. I hope and pray he does!

This issue is really important.

The concept of equal protection is a righteous one. God commands magistrates to judge without partiality. And all laws that discriminate by protecting preborn people less than born people are, by definition, partial.

Pro-Life bills often demonstrate partiality by discriminating against those who don’t have heartbeats, who were conceived in rape, or who have fetal abnormalities. They regulate abortion like healthcare rather than securing preborn Texans the same protections against murder that born Texans like you and me enjoy.

The fact that the Bible tells us, “You shall not pervert the justice due to the … fatherless,” should ultimately be all we need.

But the Bible doesn’t stand alone in commanding equal protection.

The US Constitution requires it in the Fourteenth Amendment when it says that, “No state shall… deny to any person within its jurisdiction the equal protection of the laws.”

And on top of that, the priorities and principles of the Republican Party of Texas (RPT) call for equal protection.

The RPT principles declare that, “We believe in… The sanctity of innocent human life, created in the image of God, which should be equally protected from fertilization to natural death.”

And the official legislative priority of the RPT is to, “Abolish abortion by ensuring the right to life and equal protection of the laws to all preborn children from the moment of fertilization.”

These priorities were set at the grassroots level by people like you and I, not by those whose interests lie in Washington or New York or California, or even in Austin. This is the will of grassroots Texas Republicans.

I am excited to see that Senator Huffines is unashamed of his commitment against abortion AND has made a courageous commitment to Ignore Roe. But we hope to hear him voice support for equal protection, because without providing preborn children with equal protection, we haven’t really abolished abortion.

Yet the statements Huffines has made have the strength of standing on principle, which is encouraging.

Too often, we have Republican candidates like Allen West who say they are “pro-life” but talk and act like they are pro-choice. Their principles get thrown under the bus along with the babies they are unwilling to protect. It’s a shame.

We would rejoice to see a Texas governor exercising the full duty of the office to fight for Texas babies without compromising justice or violating the Constitution.

We look forward to the day we see that kind of courage in office!

In fact, we don’t just look forward to it Friend, we work for it.

And there are many people laboring alongside us by taking action when needed. If you are one of those people, thank you!

Our Sustaining Members are committed, along with us, to abolishing abortion in a way that honors God and doesn’t compromise justice or ignore the Constitution …

We are working hard to grow this movement by reaching more people like you AND by holding our public officials accountable for what they say and do about abortion.

And we are committed to continuing this work until equal protection is established for all our preborn neighbors. If you are too, please join us as a Sustaining Member.

Thank you for standing with us!

P.S. We are excited about the work ahead in 2022. We have plans to reach and mobilize more Christians in the state of Texas to get active in this fight to abolish abortion. We are truly grateful for every person who supports this work. Please consider committing to a monthly donation as a Sustaining Member right NOW.